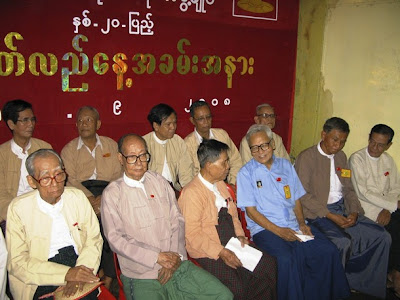 U Win Tin and some other former political prisoners recently released from prisons after long term imprisonment attended the ceremony of the 20th anniversary of the formation of Burmese opposition party, NLD. Some leaders from other alliance political parties attended together with them. Photo – Front from left to right, U Soe Myint, U Than Tun, U Aung Shwe, U Win Tin, U Khin Maung Swe, U Hla Pe. Back from left to right, Pu Kyint Shin Htan, U Than Pe, U Aye Thar Aung, Dr. Than Nyein, Naing Ngwe Thein ( Photo – Internet)