Why they run
People from Rangoon fled only when their houses were on fire. For the villagers, they were running for their lives.
The villagers had to run in the areas where armed guerrillas were around.  Whether these rebel groups had truce with the Tatmadaw or not, the villagers were still always on the run.
The villages at the borders were food and supply chains for the rebels. When the Burmese military regime (the Tatmadaw) ordered the villages to be destroyed or relocated, the rebels were found themselves hard to run their operation. However for the villagers, they found themselves running for their lives.
In one of the website run by the non-government organization, TBBC, Thailand Burma Border Consortium, http://tbbc.org, the situation of such villagers were reported both in English and Burmese language.
According to the website, it said that the Tatmadaw forced the villagers to resettle in nearby towns or send them to specially assigned makeshift villages in order to take military advantage of such areas over the rebels and sometimes, they burnt the villages preventing the residences from returning back in the future.
Villagers’ Wishes
“They do not disarm the land mines, and they (the Burmese army) do not withdraw from our place. We couldn’t go home. All we want is peace and tranquility to be able to go back home”
Told one villager who recently fled from a village in “Than Daung” township.
In one of the repot from TBBC, it was read as follows; within last twenty years of civil war in Burma, some rebels agreed to cease-fire while some major rebels bases were occupied by the regime. That was why Burmese armies were now able to penetrate and expand their military access into some remote areas where they had never had before. It meant that more villages and villagers would be running into more trouble and despair.
Whatever danger and threat they were facing, the villagers regarded their villages as “home sweet home” and they had their farms and traditional family trade that they would love to carry on since from the past generation, they sneaked into these forbidden land to resettle again. The Tatmadaw could not allow such thing to happen. They had variety of cruel ways and means to get rid of these people. 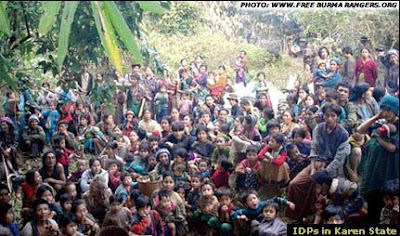 The Progress
In Karen and Pegu States, there were 60,000 villagers in hiding but the Burmese military regime decreased its brutality towards its people according to the reports.
In all those states in Shan, Kayar, Karen, Pegu, Mon and Tanithayi, there were 450,000 villagers deserted their homes and villages. But comparing 2008 records with 2007, the figures reduced to 10 percent as reported from the website.
Refugees in the Refugee Camps
When the war broke out on their own land, the villagers had to flee and they fled to refuges camps in Thailand. The villagers forced out from their homes also had to run into these refugee camps. Some were found still hidden in the jungle as self-imposed fugitives from the oppressing army. In the refugee camps, the villagers had to setup their own tents and huts to house themselves.
Some might think that spending time with fellow villagers around in the safe refugee camps would be fun and fancy. However if they were to stay and be stuck in the camp forever then the refugee camp became a prison for them.
In total, in all refugee camps from Thailand, there were 150,000 people stranded inside according to TBBC website. People from Rangoon and Mandalay might not aware of them,  some would wonder.
(Photo – The man from Mela Refugee Camp, he was in this camp for 21 years)