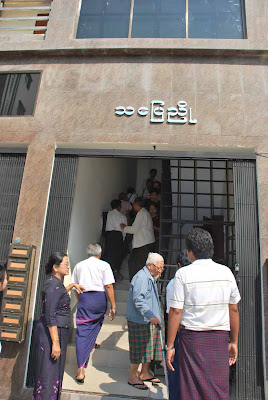 One of the great Burmese national poet and artist, Min Thu Wun shall be turning 100 year of age if he was alive and still his family members were celebrating his 100 year birthday with his colleges and friends at his home located at U Tun Lin Chan St, Kamayut, Rangoon, Burma.

While back in his day, he used to host Burmese traditional harvest celebrating event at his home, offering “Htamanai” Burmese food to all his friends, peers and young generation writers’ community. He passed away on 15th August 2004 at the age of 96 and still at his 100 birthday with his absence, all walks of life came to honor the ceremony.

scenes at the event

Collection of his rare photo albums, his manuscripts, his documentations and achievements, his published books and books about him were show-cased by his family members at the event.

All the invited guests received a memorial book on this event as a gift from the family together with an event pamphlet of Sayagyi Min Thu Wun.

It was regarded that Min Thu Wun with his greatness and gifted talents in Burmese literature, had shown his remarkable hard works especially in 1990 multi-party election period. It was a undisputable fact that he will not be forgotten by all the Burmese people of every generation from past, present to future for his commitment and works for freedom and peace for Burma.