MoeMaKa – When did you meet her?

Ma Lei Lei New – We have known each other since back in 1998 September 24th, in “Aung Thabye” military intelligence’s interrogation center. We have not only spent time together in the interrogation room but also in Insein prison, in the same cell too.

On April 6th 1999, when we were relocated to remote prison, we were moved together. We were with 50 males and 5 female prisoners. For us, we were Ma Kyi Kyi Win (Kyimyindine), Zin Mar Aung (Still in Mandalay Prison), Myat Sabe Moe (now in Norway), Nobel and me.

We spent 3 months in Mandalay prison and later I and Myat Sabe Moe were sent to Shwe Bo prison, Nobel was to Myin Gyan prison separately. Since then we were separated. But in 2005, when Nobel was released from prison, we all old friends reunited again.

MoeMaKa – Hninn May Aung seemed ever been depressed? How do you find her?

Spending time in prison, for anyone, how much strength you have, we all feel depressed at one time. Everything in prison is inconvenient and in very poor condition, all everyday activity in food, living condition including shower time was troubling. But we all are with principle and conviction, no matter how hard situation we face, how terribly we are treated, we stand unshaken firmly. Nobel is one of those people.

She tried her best to help others, she sacrificed, and she was tolerant. Still she was one of the strongest principled political activists. She loved her mother so much.

MoeMaKa – Inside the prison, had the authority persuade them not to involve in politics and urged to sign such concession letter?

She was released last time after serving seven years in prison without signing any preconditioned letter by the military intelligence. And yet, whether you sign the letter or not, as a former political prisoner, everyone was under surveillance of local intelligence. For Ma Nobel, under any circumstance, under any surveillance, she carried on her political activity and joined the movement of 88 Students Generation led by Ko Minn Ko Naing. 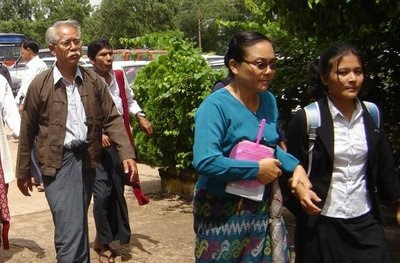 MoeMaKa – How’s the food in prison?

The meals in the prison were called “Pon Zan”, a standard meal like bean soup with a lot of water in it or vegetable soup with combination of left over pieces of vegetables. Even the pig won’t want to eat so we called these meal,  “Wet Gaung Khar”, (pig shake its head) in prison. And we had dried fish paste and rough rice which we never saw outside but we had to eat in prison.

MoeMaKa – How the family members visit her in prison?

While Ma Nobel and Aunty Aye (her mother) were in Insein Prison in Rangoon, her father and her younger sister, Nightingale took turn to visit them. They gave “Nga Pi Gyaw”, a kind of dried fried fish combined with dried chili that could last long in prison. Their home was not financially sound so they could not provide much food but still she shared with fellow cell mates like with us.

MoeMaKa – How you, Ma Lei Lei Nwe was imprisoned and when?

I was arrested in September 1998. Because in August 1998, I helped published and distribute under-ground newsletter called “All the innocent lions, let’s break the cages!!!”. I spread even from the moving bus on the streets.

Because of this, I was sentenced 21 years under the regime’s emergency act 5 (J) articles 17/21. Later I was moved to Shwebo Prison. The military intelligence had never informed my parents so that they could visit me after 8 and a half month later.

MoeMaKa – When you were released and from which prison?

MoeMaKa – Why Hninn May Aung was frequently arrested and imprisoned?

In 1998, she participated in protest movement calling for the Burmese military regime to allow “People Parliament” formed by elected candidates of 1990 election. She was arrested and sent to prison for 42 years. Later after serving 7 years, she was released.

In second time, she was arrested by mistake. But Burmese military intelligence did not release her even though there’s no case against her. Later she was accused of accompanying with 88 Student Generation group and sent to prison.

Now she was sentenced 11 years. She was moved from Insein to Monywa Prison, where she used to spend her first time in prison. In the first imprisonment with her mother, her mother was also sent to another remote prison further away from each other too. The family members now had hard time visiting to both prisons. Now still they were struggling and her mother was not very well these days. It was a troubling situation for all the family members. 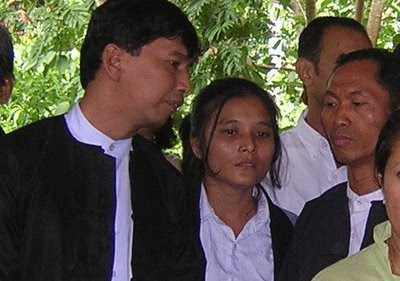 MoeMaKa – If she heard the news that she was being honored as Honorary Citizen of one Italy’s town, what could become of her and expectation?

She would be honored and happy. She would be proud of herself. This was a great moral encouragement for a political activist in prison. Aunty Aye (her mother), she would also be proud and happy too.

MoeMaKa – Were there any significant memories with Hninn May Aung?

When we were moved from one prison to another back in 1999, all our 5 woman political prisoners tried to our best not to feel sad or despair but instead we shouted all the songs that we could remember all along the trip to keep ourselves encouraged. Nobel was one of us. And still she did not know how to sing originally but she always sang one and only song all the time and this song was one and only great political song of our time (like “International”) and it was called – Kabar Ma Kyay Bu (None Forgiven).