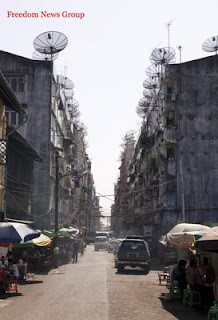 In recent junta’s newspaper, “Myanmar Alin”, one columnist named Ko Gyi (Ngwe Zin Yaw) stated that Selling of Satellite Dishes and Receivers should be put to a stop, calling for ban of Burmese watching international news and program.   It caused a market upset in Rangoon.

When Burmese could watch protests and unrests of neighboring counties through Satellite channels, Burmese junta seemed to become restless and they did not want its people to have “All government was mortal” idea.

While the regime was limiting the speed and bandwidth of internet access to the general public, still the Burmese generals wanted to keep its people deeper in the darkness of ignorance and unawareness. They were now targeting these lifeless Satellite Dishes as undesirable foes.

If Satellite Dishes on the rooftops became the defiance sign, it could also mean that having those dishes were the sign of silent protest of Burmese towards the Burmese regime.

So it was to speak that while Burmese Generals in Naypyidaw Capitol had already decided to cut off Burmese people from the international community, the Burmese people were also in undeclared resolution to keep their dishes on their roofs as  silent protest.