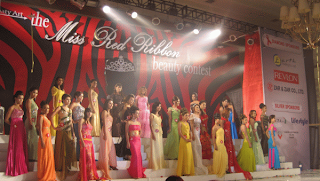 Some commented that it might be a step forward of gay community in Burma to be like a gay rights movements of other countries. At the beginning of the attempt, authorities did not allow organizing the contest but Daw Yu Zaw, sister-in-law of Burmese Tycoon U Tay Za, finally managed to get permit from the authorities.

One commented to MoeMaKa that Junta had taken a fist step towards “Transition to Democracy” by taking on the Gay’s Rights before other Human’s Rights.