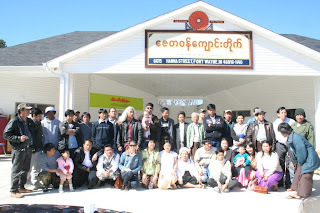 Burmese Monastery in Fort Wayne, In. received tickets from the City

It was learnt on last Thursday that the city officials had issued ticket and took action on the addition construction of the Burmese monastery due to the lack of proper paper and permits. The monastery was known as “Zaytawun Monastery” to all the residing Burmese immigrants migrated from Thai-Burma borders as political refugees in the area of Fort Wayne.