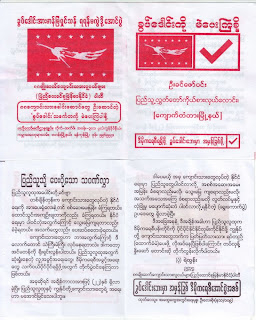 Although this is the first time in 20 years to hold the general election in Burma, the National League for Democracy (NLD) stood against and boycotts the election due to various issues of election laws and undemocratic constitution written and approved in 2008 by the Junta.

Some residents told MoeMaKa that the coming election is not being interested by most people and half of residents in Rangoon were not willing to cast the vote.

The State Peace and Development Council (SPDC) military government issued the hardship election laws and procedure of constitutions which caused limited and intimidated support and funding for all competing political parties except their backed USDP Party. Therefore witnesses were saying that the only affordable and safest way to do political campaign for other parties was to handing out leaflets in public places in Rangoon.

(Photo – Picture of leaflet distributed by one of the political party)