U Khin Oo was a chronic TB patient. Daw Ohn Yee had taken care of her son, but the past five days was stressful because U Khin Oo had fallen into a coma. U Khin Oo’s wife had been struggling to meet the bare necessities of her two children. Daw Ohn Yee probably did not accept that her son was unconscious, and tried to have a conversation. On 6th October 2010, she shook her son’s body and kindly uttered, “My son Maung Khin Oo …. My son Maung Khin Oo”.  She had a mental and physical lapse around 6 PM and passed away. Her son passed away at 8 PM, as if he had decided to follow his mother’s fate. The double tragedy left the survivors (U Khin Oo’s wife and two daughters) helpless.

Though the mother and son entered the world at different times, they left the world on the same day. Is it a coincidence?

Marana (the Grim Reaper) knows no laws and no bounds. There are no set rules based on class, wealth, friendship, and age to determine when one’s life comes to an end.

People who are hungry and crazy for power, properties and riches should pay heed to the Grim Reaper. People who love and cherish their parents, teachers, spouses and children should note that they and their loved ones are not immune to the Grim Reaper. It is therefore very important to practice morality and unbounded love, to offer humane services to the society, and to take the Three Refuges (Buddha, Dhamma, Sangha).

Sooner or later [even now] we will be sick

Sooner or later [even now], we will die

We will surely die, make your rare [and precious] life meaningful

Before you die, practice [insight] meditation and gain wisdom 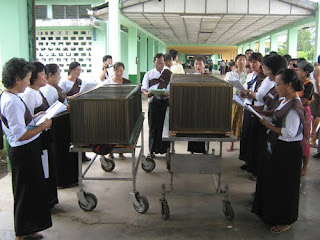 Is it a coincidence that two family members, who are born at different times, pass away the same day? The Grim Reaper has no bias regarding his selections. Multiple tragedies in a family are not desirable but are possible.

U Kyaw Maung (age 78) passed away from a chronic disease at 7 AM on 8th October 2010. His daughter took the death certificate from the doctor, and applied for permission for his father’s grave from the township health department. When she got back home, she was shocked to learn that her brother U Tin Tun (age 57) had succumbed to TB. Swiftly, she had become the lone survivor in the household.

U Kyaw Thu, chairperson of Free Funeral Services Society (Yangon) (FFSS), staff members transported the bodies of U Kyaw Maung and U Tin Tun by a BM bus provide by U Si Thu, a member FFSS, for burial in the cemetery.  The FFSS members and well-wishers also chanted verses along the funeral procession.

We don’t want to see, hear and say anything unpleasant. It’s unbearable when double tragedies occur in a family. The past days had seen the death of a mother and a son, followed by a father and a son. From the sad events, we should have samvegha (sense of urgency) and accept that Marana (the Grim Reaper) has no time table for all of us, and that we should practice to lead fruitful and meaningful lives helping ourselves and the society.