The tour began in August 2010 and encountered numerous protests by the Burmese community in the US. As a result, U Ei Tha Ri ya (the monk who sponsored the visas for the band) filed personally on 7th October to the US government that he was withdrawing his sponsorship.
Ko Nyi Nyi Aung, an active activist from the Burmese community in Washington DC Metro area, told Moemaka that the United State’s Immigration Service immediately revoked their P1 visas of all of the 10 Burmese from the band because the band had caused controversy among Burmese American Community due to its inclusion of the junta’s propaganda actress, and the its sponsorship by the Burmese monk had been withdrawn.
According to the immigration rules and regulation, all the band members lost their visitors’ status and are considered illegal visitors. It was learnt that not only they were to leave the country effective immediately but also they will be prohibited to enter the US for the foreseeable future. The list of revoked visas include: Soe Moe (Manager), Min Maw Kun (Actor), Ye Lay (Actor), Leonard Maung Maung Lwin (Musician), Petric Maylar (Musician), Ye Phone (Musician), Tutkey (Musician), Wyne Su Khaing Thein (Actress), L. Sai Zee (Singer) and Rebecca Win (Singer). 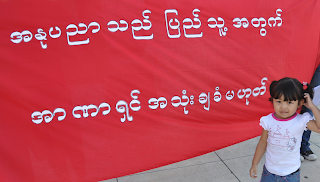 (Burmese Protest Poster at LA on 12th Sept 2010)
“Since from the beginning of  their tour, there were many discussions made within Burmese community to avoid protests but they (the band and the their supporters) never backed down and continued their tour. Due to our political principle and belief, we had to protest them as the instruments of the Burmese junta. However we were not making any personal attacks to the members of the band. Finally it was due to the solidarity of Burmese American community, collective wisdom of the Burmese monks’ community and last but not the least the policy of the US government to impose political sanction on the Burmese regime and its accomplices, the matter came to the end peacefully and lawfully” said Ko Toe Lwin, one of the active activists and dissidents of NLD (LA) (an exile branch of Burmese opposition party of Burma, NLD led by Aung San Suu Kyi) now living in San Francisco Bay Area.
This is first time in 20 years after the Burmese regime bloody coup in Burma that the Burmese American community publicly denounced the Junta’s propaganda activity and its supporters, and resulted in the expulsion of the regime’s artists.