It has been over 3 years since “Myanmar Child Aid Foundation” has provided educational support for 613 orphans from Thingunkone Township, Latputta, Irrawaddy division who lost both parents in Nargis Strom of May, 2008.

The leading Sayadaw (Abbot) U Dhamma Piya of Nyar Gyan Pyan (Rangoon) and Metta Nanda (Fremont, USA) monasteries, told Moemaka that the foundation, in coming of new year 2011, will focus more on its orphanage home and educational and social charity work, which based in Nwekhwe, Mingalardone, Yangon (Rangoon), than from the previous activity of delivering financial aid to the parent-less children residing at villages in Irrawaddy division.

END_OF_DOCUMENT_TOKEN_TO_BE_REPLACED 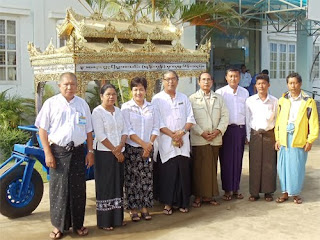 1.     Free Funeral Service Society ( Yangon), which has been offering free funeral services and free medical care at Thukha Kuthophit clinic for people in need, donated a wagon ( to be used as hearse) to free funeral service society of Minhla town. In Minhla town, as local tradition, when someone passes away, the carcass is usually laid in front of its own house. The donated wagon will facilitate the transport of carcass to the respective funeral sites by pulling it with a vehicle or by manpower on the day of burial or cremation. It costs approximately 180,000 Kyats. It is the donation made with public contributions via FFSS (Yangon).

END_OF_DOCUMENT_TOKEN_TO_BE_REPLACED 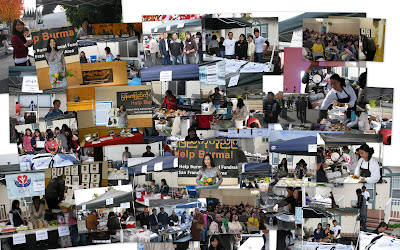 Yesterday afternoon, at the hall of Newark city, in San Francisco Bay area, Burmese community from the USA held a fund-raising. This concerted event was organized by a group of social activists called Project Help Burma.

END_OF_DOCUMENT_TOKEN_TO_BE_REPLACED

MoeMaKa was able to have a brief but interesting interview this evening with the people’s leader Daw Aung San Suu Kyi, leader of the National League for Democracy (NLD). MoeMaKa posed questions to Daw Suu on behalf of its world-wide readers and solicited her opinions and views on national affairs.

MoeMaKa : First of all, we would like to tell you that the Burmese people are very happy for your release. We feel encouraged. We all wish you success in your plans for national affairs. We pray for your health and safety. We support you now and forever.

DASSK : Thanks. I am glad to hear about it.