“We want both the adults and children to realize that Burmese dancing has its own characteristics and rhythmic music timing; that they need to understand how they can compose and present their feelings with the arts, and that they should freely enjoy the arts with heart,” he added, “We organized it as a step by step effort to support our country’s struggles towards democracy and developments.” 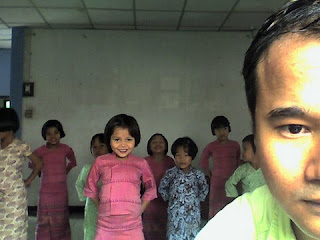 “Yes, when much blood was shed in an East Europe country because of genocide, attempts to secede and serious religious clashes between Muslims and Christians, plays were frequently performed in a theatre from the Capital of that country under the roar of bombs and guns. While the snipers were shooting on sight anyone or anything appearing on the streets, risking their lives, all the hostages (I mean all Muslims and Christians) being blocked in that capital managed to go and watch the plays for a relief break. A performer of that theatre told an American poet that he did not want and could not flee away from the battlefield, and when he had to perform, he would always be on the stage to entertain the audience who came there by hiding, running, crawling through bombs and bullets. At least, Burmese artists should, with their performances, take the responsibility to soothe the stresses and harshness of everyday life of the oppressed,” a friend of MoeMaKa from an East Europe recounted his experience and made comments on the plan of Thee Brothers.