Since my mother read that book, it was already an old one. When I told my mother that I wanted to read ‘Desiree’, she gave me two different copies of ‘Desiree’. The old one was what I had already talked about. Another one was sent from my friend since 4 or 5 years ago, my friend sent it to my mother. My mother wanted to keep the better book instead of an old one. She also wanted to replace with new book. The old book was turned to worse. But after receiving the new book of ‘Desiree’, after she read it, she said she could not ignore the old book. I did not understand, why she so was prejudice for her old book. She should keep the new book instead of old book. But she wanted to keep both. 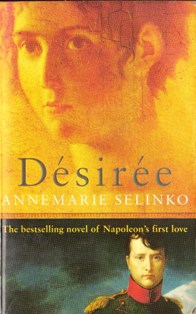 I had now two books of ‘Desiree’ in my hand. The old book was now turned to worse and worse. All the pages were loosened. If I chose it, I had to be careful for holding pages. But I chose the old book first to read. I found many historical events and world histories in it. I read the pages very carefully, because the pages were sometimes fallen from the table while the wind blew through my window. I had to keep safe in the plastic transparent bag the finished reading-pages. After reading the old book, I kept it preciously in the bag and returned it to my mother. And then I tried to read new edition of ‘Desiree’. I wanted to know what difference between them.

Yes, not surprisingly, the translation was a little bit different. This new one was translated by Arnold Bender and E.W.Dickes. I did not know who translated the old one. There was no mention on it. But I loved to read both. After reading some chapters, I realized some were different. Some were not mentioned in the old book, but in new book, vice versa. I found there were something missing in the new book were found in the old book, vice versa. I pondered they all both were translated from the original, why it was different between their translation? So that’s why my mother wanted to keep these two books. That’s why she could not throw away the old book although she received the same book but with different translation. It meant that if we wanted to keep the old book for a long run, we had to find the same old book neither more nor less. My mother suggested that I had to learn Dutch language to know exactly in the original Desiree, so I could find out which was most likely to the original. It was perhaps the only solution? I don’t know. Is there better solution without learning Dutch language?