We welcome our Burmese new year beginning with three days or sometimes 4 days of water festival. The Burmese new year falls on the second week of April as begins on 13th april and will end on 16th april. April 12, 2012 will be the welcomed day of our Burmese New Year. The true spirit of the water festival is to have nice clean fun with dear friends sprinkling water on the one another. Children especially enjoy throwing water on one another.

Novitiation is the symbol of thingyan festival in a Buddhist family. It is one of the New Year activities. On these occasions, boys are sent to the monastery where they become ‘koyins’,or novices .They stay for a week or more at the monastery. Their heads are shaved. They wear yellow robes. They go on alms rounds carrying black alms bowls. They keep sabbath. 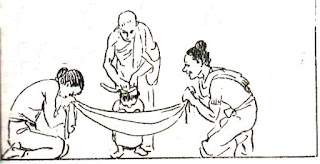 (Novitiation ceremony; the boy sat obediently middle of his parents, the head was going to be shaved by the monk and his parents with happiness proudly held a snow-white sheet to receive his hair.)

All these April days, there is music in the air. People keep fast, give alms and do good deeds. 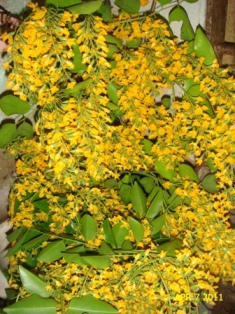 Padauk Pan(Yellow Flowers called Padauk) only blossom on April if fortunately given water from celestial(Rain showering). Padauk never blossom on any other Burmese months. In April, Burmese women wear Padauk on their head and also offer before our household shrines. If no thingyan shower for the month of april, we rarely see the beautiful Padauk on Thingyan month.

Famous poet named ZawGyi portrayed about this flower as ‘blossom only on the day of the month of a year, how faithful art thou!’