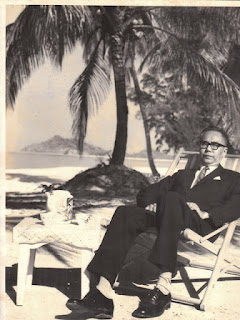 (Photo of my grandfather, who was in China in 1967 at that time China Cultural Revolution occurred. He was there with his group sent by the Ministry of Information.)

Every day I switched on TV and searched my favorite movies on several channels. We did not want to miss the news of the world too. Television and the channels were the essential things for us. When grandpa’s time, there was only one channel and we all watched it together.

Yes, grandpa, I missed you. You loved the movies very much. Whatever you saw on TV, you always said you loved it! There was only one channel at your time and there was only one or two movie shown on TV once a week. There was only news time once a day on TV. We had to buy the TV program at the shop every week to know for next week program. MRTV(Myanmar Radio &Television) was the only one channel in our country since about 1970(?) until Myawadi TV channel occurred in 1996-97?.

When the two TV channels broadcast in our country, we were very excited to watch the double programs. But the news on TV was the same schedule, grandpa. Only the movies and the songs were shown in difference. But we all loved to watch MRTV and MWD(Myawadi) at home. At that time, the Koreans Movies were introduced on TV, grandpa. There were sub-titles in Burmese on Korean movies and we all understood all very well. These Korean Movies changed our interests Myanmar movies into Korean movies.

Before that time, we never heard Korean Movies. But when the Korean Movies became popular among Myanmar audience, it was a Great Change in the heart of the people of Myanmar. I did not know why we preferred Korean Movies to Myanmar Movies. I missed you, grandpa. You loved whatever shown on TV? If you saw such Korean Movies, I wondered how you loved and enjoyed them so much!

After some years passed, MRTV4 appeared as a new Channel in our country. So, it meant that there were 3 TV channels in Myanmar! We were so busy with the programs on TV. If there were 2 different movies shown on MRTV and MRTV4 at the same time, we used remote control to change and watched the show. It was an exciting and happy moment in our life. But the news on TV announced at the same time, grandpa. We don’t need to change the channel to see the national news or international news. It was the same reports broadcast in the same time every day.

Korean Movies were more and more popular among the watchers. These episodes became most famous programs in Burma. Some young people followed their life-style and fashions. Some children imaged their culture and some adults loved to watch these series on TV every day. Even they watched those series on TV every day, they could not feel enough and bought Korean movies video cd at the shops and watched with enjoyment at home. Although there were 3 channels in our country, Korean Movies were shown on most of our programs. I wondered, grandpa, if you were still alive, how did you manage your time with these favorite programs?

Nowadays, not alone 3 TV channels, there were several channels could be watched here. Satellites became very popular and other free channels appeared from time to time. If we could not control our time table, we would be dizzy and lazy creatures one day, grandpa.

I knew that you loved to watch whatever shown on TV, isn’t it, grandpa? But I also remembered that you did not like watching television for the whole night. (In our grandpa’s time, TV program started on 7:00PM(I think) and ended on 10:00 PM, sometimes it depends on the programs. It broadcast only the evening through night.) But you always said TV eats our family’s free time. You did not like we watched TV for the whole evening until night. Now, we had many channels broadcast for 24 hours! There was no resting time for the watchers. How do we manage our time, grandpa?

My dear grandpa, I tried to talked with people who loved to watch TV every day and night. They said that they sat before TV for many hours, they enjoyed footballs, they liked Korean Movies, their children liked to watch the cartoons, etc when their family members went to work. If you were still alive, are you agreed with their spending their time with watching TV channels?

‘Necessity is the Mother of Invention’

There was not only TV, but also other devices as i-phone, i-pad, email, internet, tablet, e-book, computer, etc became overwhelming our free time. I know, you did not know these names. Just keep knowledge them as…’eaters of our free times’, please make a note of it, grandpa. (Very difficult to explain you, because you even did not know about computers?) I know you loved reading and spending your time with family very much. These new devices were very attractive to us, grandpa. I thought the people cannot live without them. These devices became more and more necessities to the people.

‘Far from the Madding Crowd’

I saw some people lived in villages and outskirt of the country when I just visited there, I was surprised that they did not even know about computer, they never watched TV, they never heard internet because they were very poor and they only worried for their daily meals. They struggled their life very hard. The children, bear-footed, played and run through the field under the sun shine. They might be used to the hot weather or they even did not know how to wear sun glasses or slippers? If they are going to Rangoon for visit, I wonder they seem to be modern Rip-Van-Winkles before the eyes of the up-to date people?

Not alone these people who lived in some villages, but the woman who came and helped us as our closed worker, even she lived in Rangoon, she could never heard computer or internet. She still did not know how to use simple telephone. It was a pity that she cannot afford for the modern devices or she can only consider for her daily meals. I thought I was more up to date than her!

But I still did not know what used of i-pad or tablets. I did not know difference between i-phone and i-pad. I still did not know how to use hand-phone. Some sellers laughed at me when I asked them about these things. I was out of date before their eyes, ha, grandpa? I know I was not fit-in in this world. It was because maybe I spend most of my time at home or reading and writing are only part of my works?

But I felt myself that I was all right (OK!) and I believed I was enough with my PC. I felt I did not need more. (On the other hand, maybe I cannot afford them!) But I am quite comfortable without the knowledge of new technologies and devices. Whenever I went outside and met with people who were busy with new technologies that I knew nothing about, I felt myself that I was at that time acting as Rip-van-Winkle who missed the modern world while he were sleeping for 20 years!