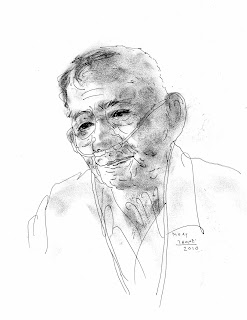 “Every generation has its own influential journalist,” U Win Tin has once said, “It’s not a novel occurrence. There are so many great journalists in Burma. Above all these great journalists stands Ludu Sein Win. He is significant against the many journalists of Burma, because he not only goes against the government in his works, but he stands up for what is right, he fights what is wrong, and he pushes for change.”

Ludu Sein Win was born in 1940. He studied at Mandalay University from 1956 to 1959. He, then, went to attend Yangon University from 1960 and until 1962. During school he was an editor for the Ludu Press. In the year of 1967, U Sein Win was arrested by the Burmese military regime, and was sent to a prison on CoCo Island. He was freed in 1980, after 13 years. The same year, U Sein Win had a stroke, leaving the right side of his body immobile. Being right-handed, he had to learn to use his left hand for writing.

After he was freed, he taught English to the youth. He wrote about the Burmese culture, especially its manners, and about Burmese issues. Additionally, Ludu Sein Win wrote essays about journalism. When asked his reason for doing so, he said that journalism is important and that this knowledge must be passed down to the next generation.

All of Ludu Sein Win’s life was devoted to journalism. In spite of the consequences he faced due to the Burmese Military Regime, he stood up against what he believed was wrong, and he stood for what he believed in.

Ludu Sein Win passed away on the Sunday, June 17, 2012 in Yangon. The Moemaka News Group sends condolences to his family members, his friends, and his supporters.