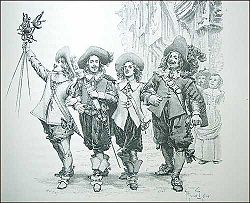 The musketeers Artho, Portho, Aramis and D’Artagan met again in 1661 and the story restored their daring statement ‘All For One, One For All’. Thirty years ago, they were musketeers and served their king Louis XIII of French. We saw and admired their actions in late novels as ‘The Three Musketeers’ and ‘Twenty Years After’. After those 35 years, what happened to the musketeers?

Now Arami, Count de la Fere lived on his own estate with his son Roal, le Viscount de Bragellone. D’Artagnan still served as a musketeer Louis XIIII. Arami was Bishop of Vannes and more secretly, the superior general of the Jesuits. Portho now the wealthy Baron de Vallon, lived on his estate. D’Artagnan, the only one who was still in active service, was captain of the King’s Musketeers, Louis XIV’s personal guard. That was I was told how the heroes settled in the beginning of the story ‘The Man in the Iron Mask’.

I had learnt from his novels that Dumas portrayed the cruelty and selfishness of Kings and Queens. We had seen that our heroes were no time to serve for their country. Heroes were occupied with tiring duties for the King and the Queen. Dumas’ s novels can be read as critique of absolute monarchy. He also criticized the position of our heroes of the country.

In ‘The Man in the Iron Mask’, the musketeers met their end tragically. Alexandre Dumas wrote this novel in 1848-50. But this title should be ‘The last of Musketeers’ (from the Introduction of the book).

The man in the iron mask was just a reason given by the author and he was nothing but a minor figure in this remarkable story. But Duma showed the reality and true mirror of our heroes.

The author criticized that although our worthy heroes declared themselves as they were born to help other men, always ready to sacrifice themselves for the safety of the weak, one day they might change their path or their mind for the sake of their own self. The heroes might change their mind while they had taken important role serving near the King as D’Artagnan served as captain of the King’s Musketeers, Louis XIV’s personal guard.

His trusted friends were taken and killed and he felt his anger on his brain and he was wounded in the heart, our hero; D’Artagnan, the captain of the musketeers determined to meet the king at the instance. D’Artagnan finally made the decision of his resignation to the king, because the king did not receive him when he was asking to meet the King. (He had decided to resign his post not because of his friends’ dead!) But the king was reconciled with D’Artagnan at the end and rewarded in royal fashion. His final choice of remaining as the captain of the musketeers and served a king as before. He remained for the reason that he had been accustomed for 30 years to go and took the orderly word of the king.

I was puzzled that D’Artagnan was fully innocent of his friends’ dead and ruin? Did D’Artagnan loved money or he was ambitious or he loved the court? Did he never regret for his final decision? But the author just gave us information that how the hero served the country like this in our real world. ‘He who serves his friends does not serve his master’. That’s the key word of our heroes go…as ‘He who serves his master does not serve his friends.’ 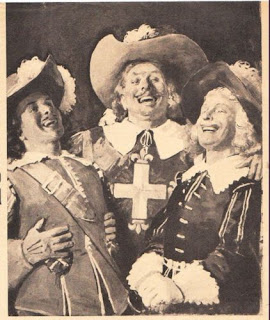 (Picture – How happy they were! If they did not have a chance to meet with D’Artagnan since from the beginning, I dared say their revolution might not be failed.)

Heroes, heroes, where art thou?