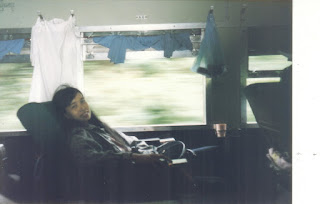 (Photo. I loved travel by train. I lay down on the seat freely. I
breathed the open air came from the window as the train drove along.)

Most of my visits, I and my friends hired a van or a car and we travelled altogether alone. I rarely travelled by bus. I and 5 of my friends had decided to visit by bus this time. Here the story began……

Mandalay was chosen place to visit. We bought tickets at the station and I felt excited travel with other passengers. The bus was as big as 80 people could sit inside. The last time I visited Mandalay with my parents by train. By seeing the scene from the window on the train was very exciting. The wind was blowing and it could touch my face smoothly. Now I was in the bus. The windows were all closed. There was air-con inside. It cooled a lot. I could not feel the wind outside as when I was in the train.

The seat I sat was not convenient, because I am tall and my long legs wanted to stretch out to the passage (that runs between the left and right rows of seats) because the front was too narrow for my legs. But the driver-assistant came and told me not to do it for the reason that it disturbed other passenger. My knees became hurt.

There was a small TV which was hanging inside the bus in front of the passengers showing the movie. The noise from the movie we heard was very loud. The movie was uninteresting to me. But we could not have other choice but watch the show. The time passed very slowly.

After 2 hours drive, about 8:00PM, the bus stopped at the particular town and paused for dinner time. All the passengers had to move outside, no one allowed to stay inside. After the passengers were out of the bus, the doors were all locked. We walked to the near shops for taking dinner. I loved to walk there. I felt comfortable outside. My knees became better. We breathed fresh air and enjoyed the night scene. After 30 minutes, all the passengers returned to the bus and we continued our trip.

The season at that time was summer. I did not bring much heavy clothes. But the air-con inside was too cool. My jacket was not enough to cover me from coolness. My hands and my feet were as cold as ice. My friends were the same as me. The noise from the movie made me sick. I winked other passengers. They had heavy clothes covered them. They wore a solid hat. They enjoyed the movie very much. They seemed they were used to the trip.

The cool, the noise, my painful legs troubled around me. I heard my grandfather’s saying; ‘that cannot be cured must be endured’. Yes, that’s right. It was the right word in the right place. We talked each other to forget our pains. But the noise from the movie was loud. We could not hear our voice clearly. I gave up talking with my friends. I watched the movie. I was a kind of movie lover. But unfortunately the movie they showed was not interesting for me. But I tried to interest the movie.

I watched the movie seriously. I forced myself to interest the movie. 10 minutes later, I forgot the pains of my body. At the moment I became going after the movie, the bus just stopped. The drivers announced that we had to go outside with our ID cards. There was an investigation centre to check the passengers and their ID cards. It was a good chance for me, because I needed to have a walk. My body became freezing. We all were going outside and showed our ID cards to the persons who examined. The walking made me feel better. We went inside again and the bus drove.

I sat on my seat again. This time I did not want to watch the movie any more. The movie continued. The interest that I tried hard to concentrate before was lost. I tried to sleep. The icy air was around me. Luckily I brought a hat. It was not a thick one, but it could warm my head a little.

‘My feet and my hands were the first to feel its absence. My bare fingers were numb. Nose and face I felt were freezing. The skin of all my body became cold as it lost its blood’. …..I was dreaming……as the story goes……. ‘To build a fire’ by ‘Jack London’…… I close my eyes. The noise from the movie was entering into my ear drum. The movie I heard was disturbing my sleep. So, what I had done? I paid attention to the movie without opening my eyes. I thought it was going to be finished. I was thinking happy that if this movie ended, there would be no more movies. I closed my eyes and tried to interest the movie. It was happy ending. It finished soon. But after the movie ended, another movie started. I had not enough patience. But I could do nothing.

I closed my eyes and paid attention again to the movie. I tried to concentrate on the movie. I became dizzily. I thought I was going to sleep soon. I slept a little while. But my friend woke me up because there was another investigation centre for our ID cards. This time, I was angry to disturb my sleep like that. How difficult to sleep! We all together going down from the bus and showing our ID cards. When we were on the bus again, my eyes were widely open and it was more difficult to sleep again. I was not happy this trip. I regretted our decision to travel by bus. But what’s done is done.

We met another investigation centre after 2 hours passed. I could not sleep well on the whole journey. I did not remember the movies showed or rest. I could not remember how many we were investigated for our ID cards. I was also afraid while I was asleep of waking me up. My back, my knees, my legs hurt so much. Because of the air-con, my head was freezing and it became head-ache. I took some medicines to relief my pain. The long and the short of the matter was we arrived to Mandalay next morning.

We had not enough time to visit all. My friends got only 2 days leave. We rested at the hotel for a while and we went shopping and visited pagodas. At that time I forgot the troubles in the bus. But I still worried about the air-con for our returned trip. I had decided to buy a blanket. It could cover my whole body if the cold increased. It was my preparation for the returned trip.

After 2 days visit, we returned to Rangoon by bus. I was satisfied myself for having a blanket with me. When the bus started to drive, I was ready my new blanket. We saw the sun still shinning outside in the late evening. But inside the car would be cooled soon. After half an hour, I did not feel any cold. The air-con was switched on. But it might not be good, I thought. I put off my blanket. My preparation was useless. The windows were all closed and the air-con was something wrong. It made me difficult to breathe. I wanted to vomit. But I did not want to vomit inside the bus. I ate sweets and tried to comfort myself. I heard other women and children vomiting. It smelt awful. All the passengers seemed not convenient because of the poor air-con. I did not hear any complain about the air-con. The movie at front was entertaining her best. My legs were starting to ache. I was waiting for the time when the bus stopped? and asked us to move out for a while…….

The experience of returning journey was as the same as of the coming journey from Rangoon by addition of poor air-con. I now understood that the cooling was more comfortable than hot. We arrived to Rangoon in the early morning.