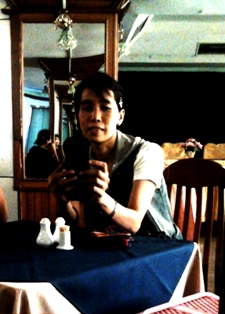 (photo: I was at the restaurant. While waiting, I called home to say I was okay.)

The mobiles phones became popular since 10 years ago. But at that time the cost was too expensive. Everybody could not afford it. My friends almost all could hold their mobiles wherever they went. I did not really envy them so much. It was very busy thing to me. They seemed to me very busy and full of activities. There were many engagements among them because of their continuous calls from mobiles. It disturbed me so much when their mobile was ringing while we were talking. I was angry for waiting when they were talking and talking by their mobiles. I thought it needed apologies for the friend who beside them alone and waiting until they finished. It was such a waste of time for me.

But there were brighter usefulness. It was good when we were away from the phone booth. It was useful when we were lost. If I say I did not want this thing, it might be a lie. Yes, I admitted that if I have extra money, I would buy it at once. But the cost was too high to have it even in my dream. But on the other hand, I felt myself free. I did not need to be worried if I lost this precious thing somewhere or it was destroyed by accident.

The time passed so quickly. During those 10 years, the costs of mobiles were changed and changed a little by little. At first, it dropped to half of the former price. Some people were going to buy it as soon as possible. But for me, it was still too expensive. The first mobiles buyers were disappointed. But it was nothing they could do.

The price droppings were not stopping. It went on drop and drop. Now it jumped to the price at which we could buy a 17 inches TV. I saw everybody including taxi drivers, goods sellers, butchers, etc used mobiles. This time I was considering buying this thing. But there was a rumor that there would be cheaper mobiles arrived next month. The price might be dropped to that of a brand new T-shirt. I was thinking again. I had to wait or not?

I was thinking that I really needed it? I was sure I did not need mobile. But nowadays mobiles could use internet. It attracted me so much. Finally I had decided to buy it at once. I asked my aunty to accompany me for buying mobile. It took a day to buy a mobile and a suitable hand set. The work went smooth and trouble-free. At last, the mobile was at my hand that I had never dreamt for 10 years!

I could use mobile now. But I had to wait for 2 days to get internet access. I was happy to have this thing. It was exciting! I dreamt that I could bring it in my bag whenever I went shopping like my friends! I could draw it from my bag and replied the call when the mobile rang among the people at the bus stop or at the shopping centre or on the road like the stars in the Korean movies! Oh! It really became happened?

After 3 days I had a mobile, I had an appointment to meet outside. I was thinking to bring my mobile in my bag. But I met unexpected matters between my families.

My father said I did not need to bring the mobile when I went outside. It was used for internet, so used internet alone at home. There were many phone booths outside. I argued that everybody used mobiles like wearing their watch. He easily agreed with it. But he warned that don’t use it among people. If the phone rang among other people, you ignored it. It might be unimportant call. If everyone saw you had a mobile, some thief could steal it from you. It could attract to pickpockets. My mother added that your mobile was not important but if you met trouble with them, it was not good for you. Ok, I promised. On that time, my uncle phoned me and warned that you had to be careful if you brought your mobile outside, because you were too clumsy and forgetful person. My mother easily agreed with my uncle. Your mobile was registered with your name, so if something happened you met troubles. If my grandparents were alive, I would receive more warnings! I hesitated whether I took it or not. I felt unconfident myself. If I lost it somewhere, everybody blamed to me. I knew all my friends used it everywhere since 10 years ago. I never heard they lost their mobile. I promised my families I would never make any trouble.

I kept my mobile at the bottom of my bag. So, the sound might be too low to hear. I don’t know I could hear it either. I saw everybody was using their mobiles in the roads and they seemed they never cared other people. Some were replying the call at the bus stop. Some were calling to their friends and talking, talking. (I now especially noticed how the people using their mobiles.) When I was from the bus, I checked my mobile to be ok. When I was at the restaurant, I sat at the table comfortably and I called to home and said where I was now. I told them how easy call to you. I did not need to find a phone booth. They could call me any time if they wanted to ask something. I hoped I would be one day carefree with my mobile like everybody else.