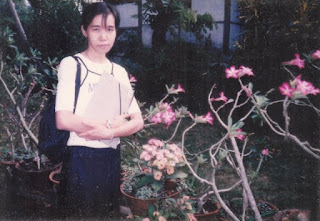 (I know my life as a writer gave me better life. My life at the University was like a fool’s paradise for spending more than 10 years with the hope of to be a tutor. I studied French language at A.F expecting a change in my fortune. But the situation did not change.)
Here how my story started on…..

When I became ambitious, I was attending second year in the University by the specialized subject of mathematics. Yes, I admitted that I had never had ambition before. Some friend of mind wanted to be a doctor, some wanted to be an engineer, others wanted to have good marks in high school. I had no thought of ambition in my high school years. That’s why I only got major subjects as mathematics to go to the University.

My twin brother was more intelligent than me. His good marks allowed him to attend the Engineering subject at the Rangoon Institute of Technology (R.I.T). I felt ashamed of myself at the first time comparing with my brother’s education. I thought if I could attend the Honors degree, my qualification could be as high as of my brother. So, this ambition began boiling in my mind and I decided to work hard.

I studied day and night. I had never worked hard like that before. I did all the exercises. I also searched further problems in the library to prepare for the unseen questions. I carefully learnt basic mathematical theories from my father. .What I learned from my father, unfortunately were of no use at all for my academic career. I took many hours calculating one problem by thorough studying. I did not want to memorize by heart without understand the problem. I had to get distinction in major subjects to attend the honors degree. Or else I would have regular degree.

The long and the short of the matter was I was allowed to attend the Honors with the rising two distinctions on major subjects through memorizing and repeating things I did not understand against my better judgment and of course my father’s. The same method was continuously used until I obtained my M.Sc degree.
But I did not know my fortune never give a chance to let me as a tutor in the University. The examination often held once per year. I failed the tutor examination many times until I obtained the Master degree. My life at the University was like a fool’s paradise for more than 10 years with the hope of to be a tutor.
Finally I was decided to give up my ambition and I would never try again to get this kind of work. I also was determined I would never, never do teaching for the rest of my life. My ambition was to teach as a tutor in the University, not as an outside teacher.
I cut off the friendship between my closed friends who were working in the University. I burned and destroyed my exercise books that I had learnt very hard to use when I became teaching in the University. I also kicked out all my Burmese Traditional clothes from my cupboard that I planned to wear when I became a tutor in the University. My mother was so upset what I had done before her eyes. I tried to comfort my boiling hatred to be calm and less hard. 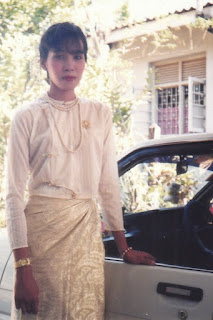 (This photo was taken when I was attending the convocation for Master degree in 1999. This was how our Burmese Traditional dress wore. It was one of the examples of the style for Burmese teachers.)
Given up my ambition was not too easy for me. I know my life as a writer gave me better life, but I still was too sensitive when those who accidentally asked me as ‘Hay! How is your work in the University? Or ‘Are you still working as a tutor?,’ or ‘Hay, Good to see you, please help me to get a grading certificate of mine in the University, because you know very well about the University. Isn’t it?’, etc’. I could not help to hating them. I realized that they knew nothing about me.
I studied French language at A.F expecting a change in my fortune after I quit the University. But the situation did not change. My father who obtained his Ph D degree from France taught me the finer points of the French language and literature. I learned that French is a great language. As before what I learnt from my father was of no use for my academic career in French. I just barely obtained the first diploma in French.after three attempts.
Epilogue
There were more remaining experiences which I had not portrayed yet. But I shall draw the curtain here. I will write later if I have a feeling to tell you more. See you, my dear readers!