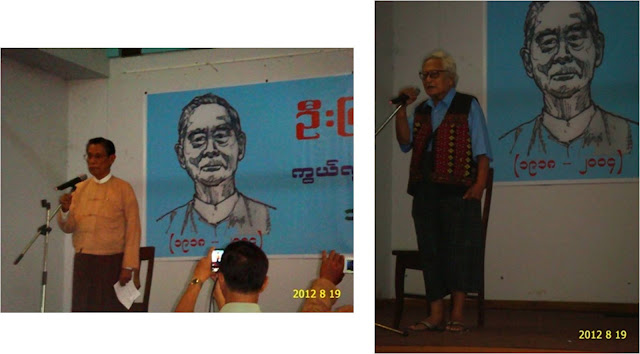 (Photo – I chose two photos of U Tin Oo (General Thura Tin Oo, retired general and former commander in chief of the armed forces of Union of Burma) and U Win Tin (Journalist and also known as a former political prisoner in Burma) for this article. When they gave address to the audience as the old colleagues of U Kyi Maung, the audience could easily notice the background was a portrait of U Kyi Maung.)
My parents were invited to attend the memorial ceremony of U Kyi Maung who passed away 8 years ago. I had learnt that it was not only just a social meeting within his old friends and his students but also there was a speech-giving program from his colleagues and his beloved acquaintances. My father was asked to give a speech about U Kyi Maung as his uncle of old times. He was so pleased to attend this ceremony and gave a speech there.
It was a very unforgettable moment when I listened carefully the speeches of U Kyi Maung’s old colleagues. They talked about the experiences between their friendships during their life time. I felt how they missed him and how they loved him very much. Their words and speeches might touch the listener’s heart. They all recalled the time of ‘students boycotts in 1920’ and the time of ‘the riots in 1988’. These were remarkable memories of all time. If I had not accompany my parents to U Kyi Maung’ memorial, I would not have heard the words of the elders.
Then came my father‘s turn to talk. My father knew U Kyi Maung as his uncle. He had no experience of as U Kyi Maung’s colleagues. He firstly addressed to the young people, (he emphasized _ ‘by young people, I mean those who have not reached the age of sixty.’ _ ) Wow! It meant I was included as a young people! The message he wished to give young people was this: ‘Make yourselves deserve the legacy of knowledge left by U Kyi Maung. That is the best way to honour his memory.’ He explained where we could find the legacy of knowledge. ‘We could find the important lessons that can be taken from U Kyi Maung’s articles published after passing away in Pyithu Khit journal, entitiled ‘Political Legtimacy’. My father concluded his address by this advice for the young people (don’t forget _ the young people of age under sixty!), ‘I wish to give an advice to the young people. I have to think many times before giving it, because I know that no one will take my advice. However, here it is: from this day onwards, read, do nothing else but read for the next three years.’
About U Kyi Maung
U Kyi Maung (1918 – 2004) was active in All Burma Student Union 1938, Burma Independent Army 1941, Fifth Burma Rifles Battalion 1945, Northwen Command 1951, Commander of Tatmaha 7 in 1953, Commander of Rangoon Command 1960, Revolutionary Conucil 1962 and Commander of Southwest Command 1962. He was not only a (forced to) retired senior general at military service, but also he was a writer, artist and teacher. He taught English and political theories to his students. He wrote a series of articles as my father’s say; ‘Political Legitimacy’ _The Right to Rule. We could find two important lessons that can be taken from these articles are _ political terms and biographies. If we look for the political terms in the articles and look up for further meanings in dictionaries or look at the names of the people in the chapter on the sayings of famous people and study their biographies in encyclopedias, (as my father’s advice to the young people), that also is part of U Kyi Maung’s legacy of knowledge.
Epilogue
My father said ‘from this day onwards, read, do nothing else but read for the next three years.’  He said that no one would follow his advice. The advice will even cost his popularity which is not much anyway, he said. Whether it was a good advice or not cannot be seen at once. After three years of not reading ,one can look back and see for oneself what one has achieved for the country, for mankind, for friends and family, then one can judge whether his advice is good or not.