‘Burma, The Land of Pagodas’ as my grandmother written, we will find pagodas wherever we go. Pagodas play a memorable part in the life of a Burmese Buddhist. We have been taught that wherever we visit, we will have to go to the great pagoda of the place first and raise our hands in prayer and make a wish that our trip be saved and sound. Yes, pagodas, how they meant to Buddhists! I believe earthquake or any other natural disaster cannot wash away our love and pride in pagodas and its glories although the earthquake wiped out the pagoda since in the past until to the present.
At Present 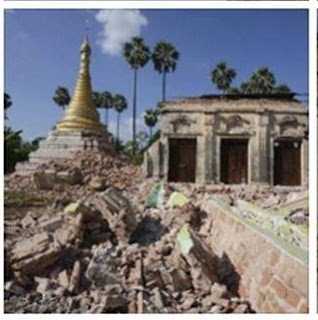 I heard in the early morning of 11th October, the latest news of the earthquake that destroyed many of the houses and pagodas of Mandalay, near the town of Shwebo. The quake happened north-west of Burma. Another earthquake hit again in the very evening at Shwebo. I saw the scene in the TV the pagodas were shaken by the earthquake. The television has said a number of religious buildings and pagodas had been destroyed. Many people were frightened and I saw some houses were fallen to the ground.
Back To The Past……
My grandmother wrote a letter to her grandchildren (It’s to us.) in her book ‘Colourful Burma’ about the loss of the pagodas of Bagan. When she heard the news about the earthquake which destroyed many of the pagodas of Bagan in 1975, she said she could not go to sleep until she had written a letter to us. I saw it from her book ‘Colourful Burma’, her letter was published as her diary in the last chapter, but I was too young to understand as she had written as ‘Will you ever know what you have lost, my children? Will you ever know what Bagan means to you?’ But as the letter goes, when my grandparents taught us ‘Anawrahta of Burma’, we became learn to love and take pride in Bagan and its glories.
Of course I did not know that when I was young, I only knew she loved Bagan and she taught me to love Bagan too. Later on, I realized that we have thousands of pagodas built during more than ten centuries of history and their stories told our Burmese kings and his great men of Burma. My grandmother also wrote about pagodas and their legends in her book ‘A wonderland of Burmese legends’. Our ‘old granny’s love songs to pagodas’ were still alive in my heart.
Back To The Present..
Now, I returned to the present. I watched the TV news about the earthquake that destroyed many of the pagodas of Shwebo, Sagaing, Sintku in central area of Burma. The photos of pagodas which were destroyed at the moment make our heart broken. But earthquakes were natural disasters and we could do nothing. We cannot foretell when or where it will happen.
Epilogue
Even though the earthquake destroyed many pagodas in Bagan in 1975, my grandmother said how generously and spontaneously contributions were pouring in towards the repairing of the stupas. Even the dark cloud fall over us, happy blessings can shine through darkness like the stars. That’s in the deed of the many Burmese Buddhists who were giving all they can….I feel hopeful thinking of their good deed and this good spirit of generosity still to pass on to us – the heritage of wonder and pride. I believed this good spirit of generosity for the Burmese Buddhist, will gain good fortune in the future.