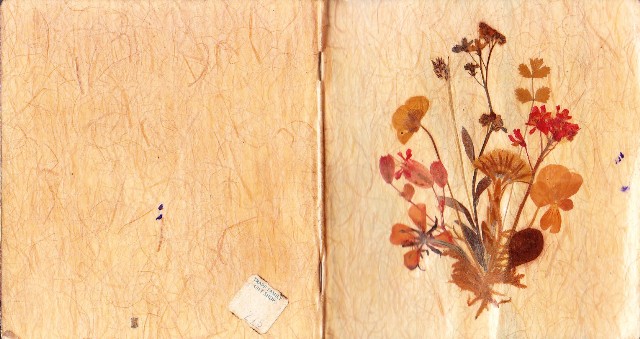 I found this petit booklet whose size was A6 in the drawer.
I found this petit booklet whose size was A6 in the old drawer of my grandma. My mother said when in 1975, December 23rd, my grandmother received this present from her beloved friend who was at that time American Ambassador’s wife. When my grandmother gave this booklet to my mother to keep carefully, we did not really know how precious the book was.
My mother showed me a letter which was found inside the book, was written by the giver. The letter told that this enclosed small gift which had been carried about the world for several years seeking just the right person it to….someone of whom she was found and someone with something precious to record therein. So she found someone who worthily owned…is… my grandmother.
She bought this book from famous Trapp Family Lodge gift shop in Stove, Vermont. The wild flowers were gathered and pressed by the famous family themselves – who sought refuge, solace and peace in the green mountains similar to their Austrian home.
History
If you were familiar with the name Trapp Family, you remembered the movie of ‘My Fair Lady’ in 1965 which story was a true story of the noble Lord named Baron Van Trapp, Maria was a lady who came and took guidance to his 7 children. Although the Trapp family now lived in America, they built their house as like as their home in Austria at the Green Mountain. I was told that the lady, Maria in 1975 came to the age of 65, if she were still alive, she might be the old lady of 102. My grandma’s friend; American Ambassador’s wife, bought this petit booklet at their Trapp Family Gift shop and she mentioned in the letter that Trapp’s family still sang the song ‘Sound of music’ although the Lord Baron and their 2 daughters had passed away.
Epilogue
Only 24 pages of this book, my grandmother wrote about her beloved grandfather, U Phay who was a Burma Scholar of his time. It was a very interesting story and we could also learn about the education at their time. There were also I found the history of their relatives and the interesting family tree. It was started from great great grandparents of my grandmother, so I saw the names of 4 generation before my parents were born. My grandmother left this beautiful message to us since then. Oh! Thanks, my dear grandma.