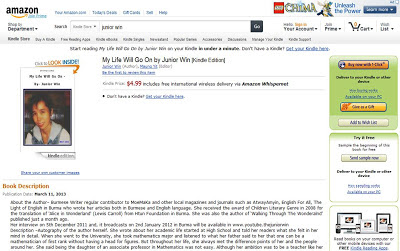 Here is my digital book – appeared on Amazon.
Book Genre – Autography of the author herself.
However she was neither a super star nor a hero, the readers can see how her life went on unlike everybody else. She said she always met the difference points of her and the people around her. Whenever she believed such things were important, nobody thought that such things were as important as she believed. Whenever she thought such things were useless and unimportant, they considered such things were important and necessary for their life. There’s a great difference of opinion between her and others on what is considered to be important.
She wrote about her academic life started at High School and told her readers what she felt in her mind in detail. When she went to the University, she took mathematics major and listened to what her father said to her that one can be a mathematician of first rank without having a head for figures. But throughout her history, she always met the difference points of her and the people around her. She said being the daughter of an associate professor in Mathematics was not easy. Although her ambition was to be a teacher like her grandfather and her father, her fortune never gave a chance to let her as a tutor in the University. She regretted that ‘my life at the University was like a fool’s paradise for more than 10 years with the hope to be a tutor’. This circumstance turned her interest to write and became a writer like her grandmother, Khin Myo Chit (writer of Colourful Burma and Anawrahta of Burma), but she said she became a writer because she had no other choice as ‘Beggars cannot be choosers’.
She became a writer although she liked to be or not, as her grandparents’ belief ‘write for pure love and enjoyment, read for pure love and enjoyment, never expect for any noble aim.’ It was the thing that influenced all her work – that surely guides her for the rest of her life.

Acknowledgements – Thanks to my twin brother, Maung Yit(Editor of Moemaka Media) who this turned into e.book.

Here is also the link: