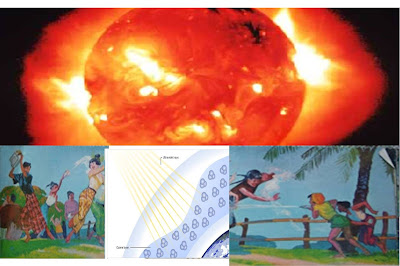 (Although our earth cannot fully protect us from ultraviolet rays from the sun, Thingyan will go on, water showering will everywhere around Burma.)
Thingyan’s Symbol
We welcome our Burmese new year beginning with three days or sometimes 4 days of water festival. The Burmese new year falls on the second week of April as begins on 13th April and will end on 16th of April. This year April 13, 2013 will be the welcomed day of our Burmese New Year. The true spirit of the water festival is to have nice clean fun with dear friends sprinkling water on the one another. Children especially enjoy throwing water on one another. All these April days, there is music in the air. People keep fast, give alms and do good deeds.
2013 Thingyan!
Thingyan Festival is nearer in Rangoon city. This water festival always attracts all the Rangoon people. But this year, unfortunately our country met hottest month of the year and, ultraviolet rays could burn our skin with sun’s radiation. The meteorologist warned that residents of Rangoon city would have protection themselves from ultraviolet rays with cover under an umbrellas, hats, or sunglasses. They also said that those ultraviolet comes from burning sun will have more dangerous during water festival, the reflection from water becomes stronger, and it can hurt our skin. People should wear long clothes to cover our body from dangerous ultraviolet rays.
Beware Ultraviolet!
Yes, I know about ultraviolet rays since I was in high school. UV light is found in sunlight and, UV spectrum has many other effects, both beneficial and damaging, on human health. However UV rays have very high radiation and are entirely harmful, large portion of the vitamin D that humans and animals need for good health. Naturally the earth’s atmosphere protects living organisms from the sun’s ultraviolet radiation. So, all the ultraviolet radiation produce by the sun were not allowed to reach the surface of the earth.  But now our world is full of gas and losing trees day by day for many reasons.  So, our earth cannot fully protect us from ultraviolet rays from the sun.
Epilogue
According to the warning, we should be more careful between 11am and 2pm going outside under the sun, because UV rays are strongest at noon. But I believed that between 11an and 2pm was the time people took their rest during water festival. Oh! How fortunate for thingyan lovers!!

← The Adventure of My Book Reading by JuniorWin
“Book Review: ‘A Buddhist Pilgrim’s Progress’ by Khin Myo Chit” by Junior Win →