My grandmother, Khin Myo Chit wrote such a booklet when she was in 1955, and she felt at that time that she had been a good Buddhist in her childhood; she did her devotional duties at the household shrine with daily offering of flowers and candles; she offered alms food to the monks, she did all the task that a good Buddhist should do; but now she stood in the wilderness of doubt and despair in her heart. Hoping to find an answer to her problem she read books on her own. But she could not find the answer which could comfort her despair.

Whether she was a good Buddhist, she once was prejudiced against monasteries and their activities; ‘It’s just one of the publicity stunts to bring more visitors’, she thought. She was prejudiced against meditation centres too. But Bauktaw Sun Lun Kyaung (Sun Lun Monastery Meditation Centre) seemed to be different to her. Two of her good friends who were a well-known politician and a well to do businessman, had gone there, and became monks. The news made her to go and visit the monastery. She admitted that she just went there because of her two friends, …

Her friends advised her to try the method of meditation they practiced. She, and her husband (my grandfather), and their teenage son (my father) decided to go to the monastery daily and tried to practice meditation. After a few days, although her husband and her son were taking the practice very well, it seemed too tough to her. ‘How can I breathe for 45 minutes when a few puffs leave me fatigued…..my nose is getting stuffed….I am feeling giddy….too much oxygen or that other stuff…my chest is getting contracted…oh no I can’t.’

But she practiced by the instruction of the meditation masters, she had a last desperate try in accordance with his instruction, breathing came easier and all the pains disappeared and she could to be filled with strange elation. After fighting through physical pains, she became to know what it was to have a calm mind. Her heart was filled with gratitude towards Sayadaws(venerable monks).

During her meditation, she had a dream. She said those dreams were as delightful vision to her. For two or three chapters of the book, she wrote about discussion with meditation master and herself, about her experiences in meditation. She decided to go and stay in the monastery for a week and practice. Her experiences during the sessions made her know for certain that it not a reliable from suffering. After many experiences of practice meditation, hearing the instructions of the meditation master, she herself had no difficulty in breathing. She went on practicing regularly, disciplining herself to be mindful in her thoughts and actions. She knew now she was on the right path. She knew she only had to go on practicing to reach the goal. 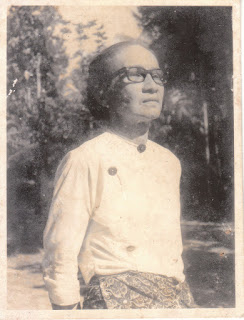 She finally said that the narrative has come to an end, but obviously not the journey, which will go until she has attained enlightenment, which obviously will not be in this life. She chose her life as a writer as that she carried on the tradition of her meditation masters, and she added this book is one of the results.