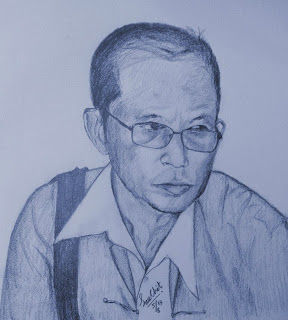 Min Lu (1954- 2013) – famous writer and poet passed away on August 14, 2013, after only 3 days of the  death of Maung Wuntha – writer and journalist.
Min Lu, Burmese novelist, essayist, and critic, whose brilliant critical writings always made his readers smile and laugh. I had been his reader since I was a University student. His romantic novels achieved young readers’ interest from generation to generation. I believed he always stood with people by seeing his writings. I heard that he never went abroad even he was invited to give speech in foreign countries. I was told that he lastly chose to go Thailand to cure his illness; lung cancer. When I heard the news of his illness, I felt deeply sorry not only for him but also for his family. I admired him as my favorite writer, and his decent life.
I remember the poem ‘Fame and Friendship’, by Henry Austin Dobson, and want to honor him with deep sympathy.
‘He had no stomach for fame that is a food that dead men eat.’
He valued ‘Friendship’ as
‘But friendship is a noble thing,
Of friendship it is good to sing.’
‘For truly, when a man shall end,
He lives in memory of his friend
Who does his better part recall

And of his fault make funeral.’