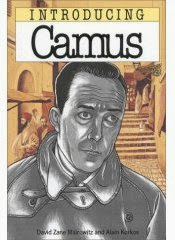 (Among them, I saw ‘Introducing Camus’ at the moment,…)

In 2004, a Burmese writer Ko Tar (publisher of Mon Ywe Publication House) requested my father Dr. Khin Maung Win, to translate some ‘Introducing Series’ into Burmese. Among them, I saw ‘Introducing Camus’ at the moment, my father gave it to me, and asked whether I would try it. Camus was a French Writer, and I knew French a little.

I read over ‘Introducing Camus’, and learn how its style might be. The illustrations inside were competing along with their sub-titles. I thought I could translate this book with love and enjoyment that always influenced all my work. But when I began to translate it, I admitted that I could not translate it without the knowledge of the history of political background and the story of Albert Camus. I learnt that the author of this book, David Zane Mairowitz and the contributor, Alain Korkos, gave the reader both the life of Albert Camus, his works and the history of political background. I decided that I had to learn more before translating it. If I translated this book just as translators do, it would be finished in a week. But as it was I took about 3 years to do it.

Firstly I searched the information on internet, and I read the novels and essays of Albert Camus as much as I could. I know that most of our Burmese readers knew his short story; ‘L’entranger’ very well. But they might be far from other novels and essays of Albert Camus. Our country was very poor in books, and I did not even know the complete works of Albert Camus. So, I had to learn about his works as best as I could find both on internet and in the library.
I made up my mind that I would try my best to translate this book, and my ambition was to gain the interest from any reader – from strangers who knew nothing about Albert Camus or who are unacquainted with the history or his political thoughts that the scenes in the book are laid. If I could not do it properly as my ambition goes, I would give up this work although I would be in the middle of my work, and should return this book to the publisher. 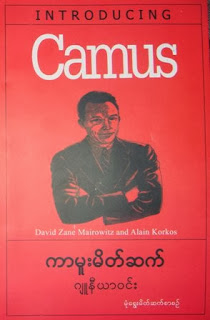 I took almost 3 years learning about Albert Camus and his life story, and the political background and history of Algeria. About three years of preparation, and three months of actual writing – that was how it was, and finally the book appeared in 2008. I tried my best and I believed it was one of my masterpieces.