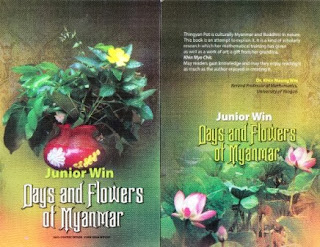 About the Burmese traditional Thingyan Pot which is still alive and used as a welcomed symbol of Burmese New Year when Thingyan Fesitival comes in April. Burmese Thingyan Pot also welcomes Tha-Gyar-Min; King of the celestial who comes and visits to human abode during Thingyan festival. I tried to explain about the Thingyan Pot in detail, and how important seven-day-born means to Burmese people. You may see that seven-day-born represents not only to Thingyan Pot, but also to the Buddhists way of life. From reading, you will have the knowledge of Burmese Days and Flowers which is not only for Burmese people but also for all the people around the world, who will become interested to make your own ‘Thingyan Pot’.

You will find how you get my book with this link;

Here are the links that  my publisher created for all the reader around the world,

← The World’s Unknown Fact Behind the Scene by Ashin Dhammapiya
Cartoon Maung Yit – What is USA and Burma now in common? (NO GOVERNMENT) →