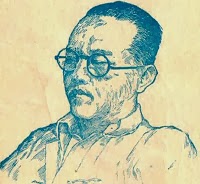 U Ba Gyan, Burmese Cartoonist (1902 – 1953)
U Ba Gyan was a famous Burmese cartoonist of all time. If he were still alive, he might be now a hundred and eleven years old. He was wise and learned and above all was gifted with irrespressible wit and humour. He dared to point out the way of sanity and better judgment. He always declared that he drew cartoons for the country, not for money. He never worked as government servant, because if he accepted, he believed he could not have better judgment for the country.
Here, I proudly add that he and my grandparents were very friendly to each other. I was told that he always visited my grandparents’ house ‘Aye Yeik Tha’, and he often drew cartoons for my father. My father said U Ba Gyan taught him how to draw cartoons by drawing left or right hand side of the face and remaining of it was for my father to draw. That is the way U Ba Gyan taught my father to become a great cartoonist that my father did not become. But it happened that my father came across such opportunities when he was too young and stupid to appreciate them. He could not keep his drawings as treasures. Here my father drew some as an example to show how U Ba Gyan taught him when he was young. 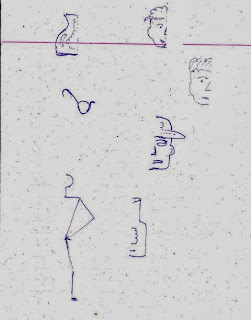 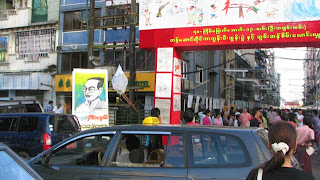 An annual cartoon show on 13th street where he lived, during TahSaungTaing (Lightening Festiva) (October) happening in Rangoon city of Burma, attracted everyone. We rarely saw the old drawings of U Ba Gyan there, although the cartoon show honored his name. But we could enjoy cartoons of modern cartoonists who drew in various topics ridiculed this modern and cruel world. 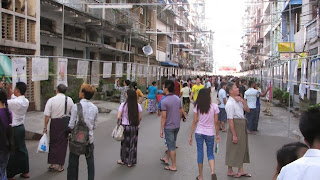 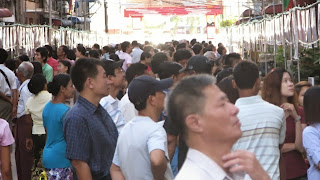 There, people enjoyed and wandered for hours in the cartoon land. The various cartoons which hung on ports or walls on the left and the right hand side of the street, people liked to read them all with interest. The viewers did not want to miss a bit of that pieces of cartoons and took photos of some as favorite.
(All the Photos credit to Maung Yit – Moemaka Media) 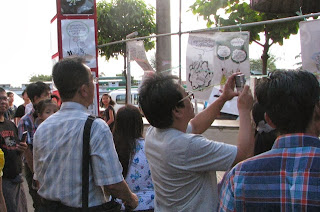 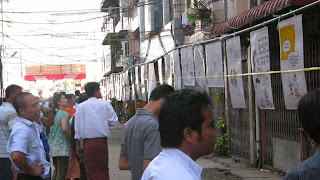