Offering of special robes and other gifts made to the Order of monks during this season – November – Tahsaungmone – keeps alive the true spirit of offering, as taught of the Buddha. Members of the same profession or trade or people working in the same office or in any township from such groups for this purpose and collect gifts for the monastery. It is also the custom of community to organize the offering of gifts, everyone contributing in cash or in kind. It is called ‘KhaHtaine’ donation. 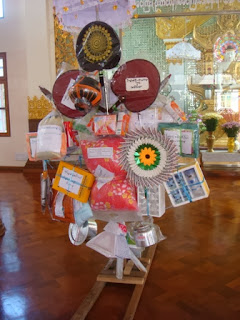 (The monastery in Rangoon city, people offer yellow robes, napkins, slippers or any useful things for monks, big or small, everyone contribute in cash or in kind for the KhaHtaine donation. Photo credit – Maung Yit) 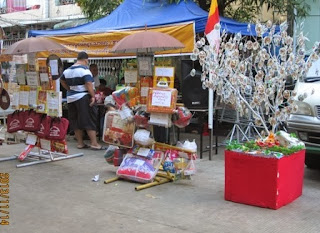 Therefore, during this season, we see wooden triangular structures standing in market places or in decorated marquees by the wayside or in front of some houses. Each structure is hung with gifts, like sets of yellow robes, towels, napkin, cups, Burmese kyat notes and such useful things. So we see some Burmese kyat notes hung beautifully in wooden triangular structure as photo above. 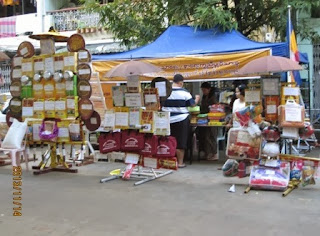 (The custom of community made KhaHtaine Donation, organizing the offering gifts to the Order of monks by the wayside. Photo credit – Dr. Soe Min Thein) 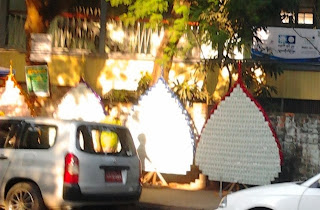 The wooden triangular structures which are made of Burmese Kyat notes; big or small are to be seen attractively to us. In the above photo you will see the figure of triangular structures which were made of Burmese one thousand kyat notes, standing by the wayside. Very attentively they made with great patience that I really appreciated with big respect. 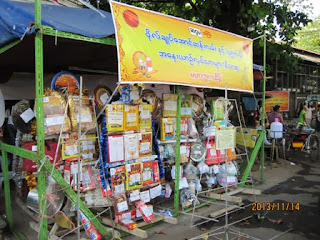 Some group of the three-wheel carriers, the drivers made their own wooden triangular structure for the KhaHtaine donation. However their daily earnings are small, they never miss this precious moment of KhaHtaine donation keeps alive the true spirit of offering, as taught of the Buddha.

When KhaHtaine season become ends, those KhaHtain donation (triangular structures with gifts) will be delivered to the monasteries situated in some country side which maybe far from the Rangoon city, and donate their collected gifts especially to the poor monasteries.

(During this Khataine season, those wooden structures are to be seen carrying by cars, driving in the streets. Sometimes there is a music troupe followed, contributing the KhaHtaine event. Photos credit – Maung Yit.) 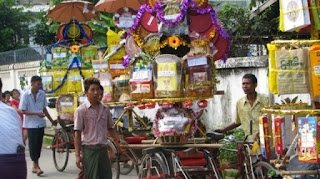 Some group in Rangoon city, organized this KhaHtaine gifts carried by three-wheel carriers, travelling along the streets, represent their contribution share to everyone to say ‘well-done’. 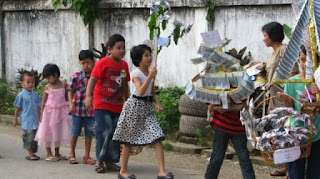 Children queuing behind the three-wheel carriers participate this occasion with pleasure. In their hands, you will see small hand-made Burmese-kyat-notes structures, for KhaHtaine donation. Photo credit – Maung Yit. 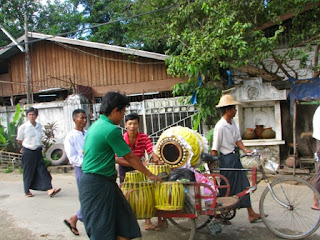 This Burmese music troupes also join this event, driving along the road, and people around them love to watch their songs and tune.

However the modern technology becomes popular and attracts to young people; seeing those beautiful and rare Burmese culture and custom; still keep alive and active in this Rangoon city, feeling so surprised and rejoicing wholeheartedly in the deed of those who generously are giving they can….. I only pray that this little piece of writing will give rejoicing to others.

← Cartoon Maung Yit – What is USA and Burma now in common? (NO GOVERNMENT)
Cartoon Festival in U Bagyan Street by Junior Win →