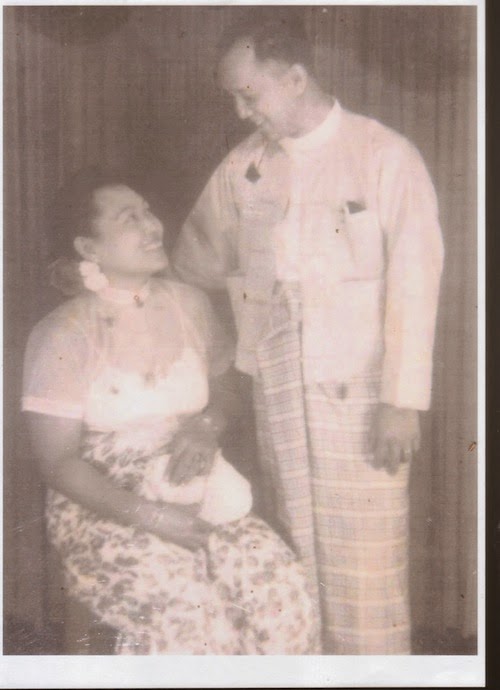 Grandparents from our father’s side; (U) Khin Maung Latt, and (Daw) khin Myo Chit, we called them as ‘Ba Ba Gyi’ and ‘May May Gyi’ about whom I had written a long or a short account of their life and
works, just as I could remember in my life or just as I collect as possible as I could in the collection from their history. I rarely introduced to my readers with my grandparents from our mother’s side – (U) Thein Nyun(t) and (Daw) Chit Tin. I called them ‘Okalapa Grandpa’ and ‘Okalapa Grandma’, because they lived at South Okalapa. 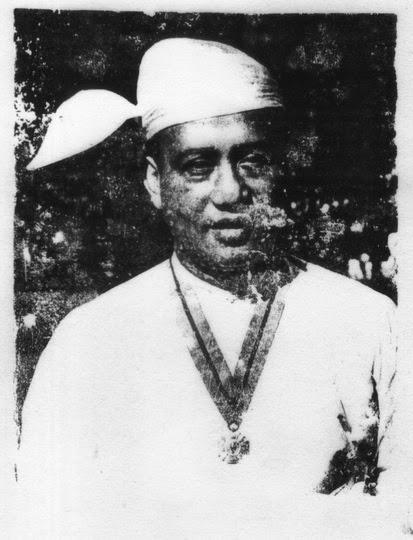 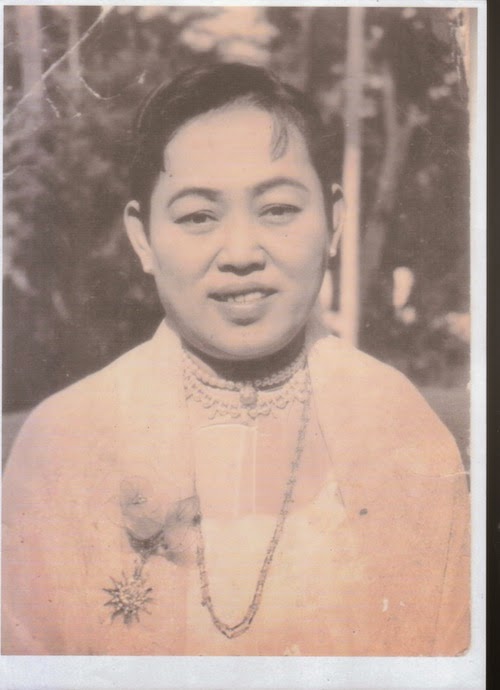 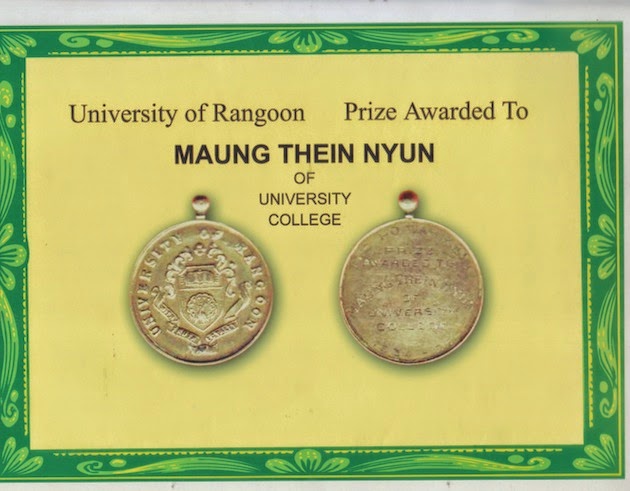 He later worked as a Chairman at I.W.T (Inland Water Transportation Board) until he was 47. He traveled some countries including India, Russia, Poland, Czech as Chairman of Cultural and Religious Affair. I believed he met some important persons in his working life. 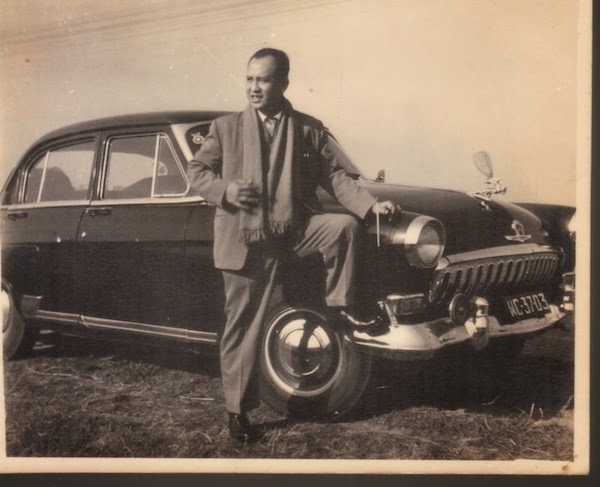 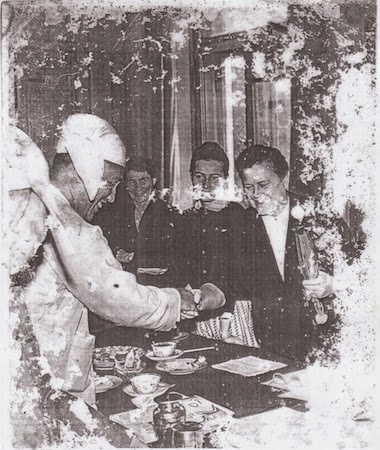 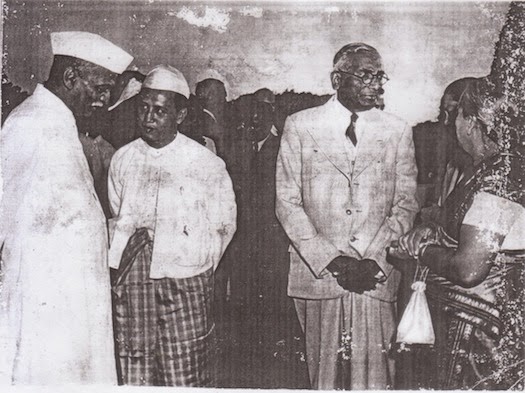 (Okalapa grandpa (face to the viewer) wore a Gaung-Paung (Burmese man wearing hat) with Burmese traditional dress in India.)
In 1962, Holiday on Ice and Swan Lake performance were held in Rangoon. Surely he attended those festival as the Secretory of Ministry of Culture. My mother told me excitedly about that event although it was held more than fifty years ago.
‘I am grateful to see such a large ice-ground created in our country at Aung San Field. Imagine that how we are lucky walking through the immense ice-floor! Fantastic! We had also had a great chance watching China Ballad Dances at National Stadium. At that time your grandfather was a Secretory of Minister of Culture and Religious Affair. So, we all attended there and watched their beautiful dances. We have a wonderful memory of our younger days.’ 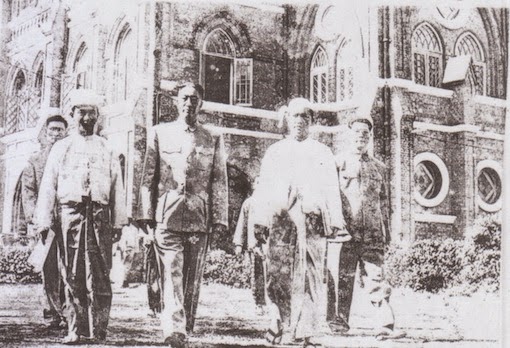 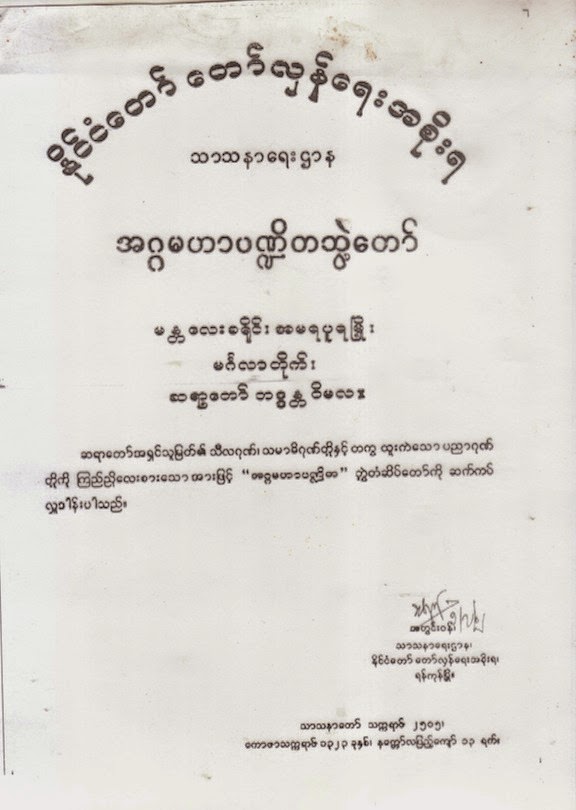 (The copy of Certificate for ‘Venerable Monk – Badanda Vimala’ in 1962, Okalapa Grandpa’s signature below was seen as he was the Secretory of Ministry of Religious Affair.)
A letter below in the Okalapa grandpa’s handwriting, he wrote to his friend whose brother was awarded with Ho Wah Gold Medal in 1961, contained the wishful and encouraged lines of his beautiful
English writing. 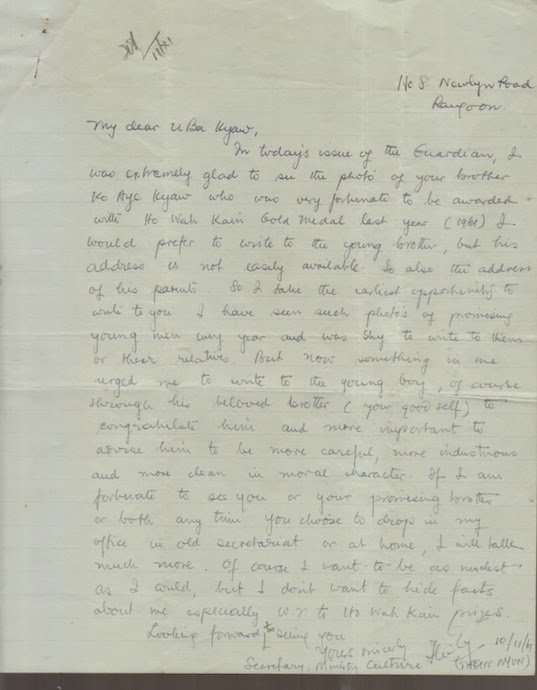 ( … congratulate him and more important to advice him to be more careful, more industrious and more clean in moral character.…Written in 1961.) 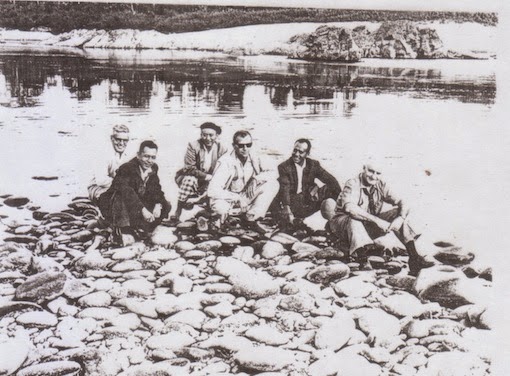 (Photo-above – Okalapa Grandpa visited Myit Son for his work with his friends in 1958. He wore a black suit sitting second from right of the viewer. See how beautiful the stones were! I have not a chance to visit there, but I imagine which of the stones will bear my name?)
The Irrawaddy is the principal river of Burma running through the upper (North) of the country to the South. It is the most well known and the longest in Burma. It formed in the north by the confluence
of the two rivers Mayka and Maylika (also known as Nmai Hka and Mayli rivers) at the Kachin state. The western branch, the river Mali(Malika) is rising in the hills near the northern border of Burma and the eastern branch, the river Nmai Hka (Mayka) in northern Burma rises in the Languela glacier and flows generally south, joining the Mali River to form the Irrawaddy River. We love to see the meeting of the two rivers. We call it ‘MyitSon’. Although I could not have a chance to visit MyitSon, I felt that the stream in the river Irrawaddy represents Nmai Hka and Mayli.
When Okalapa Grandpa (U Thein Nyunt) visited Myit Son in 1958, he and his companions together took a photo beside the rivers. One day my grandfather showed us the photo and explained the meaning of Myit Son. We saw the photo with excitement. The photo was very old but we could see the place was very clear and had a good view. At that time he worked at I.W.T (Inland Water Transportation Board). He was there on duty. My grandfather said the river was so cold that they could put their bottles into the stream to get cold. They did not need the refrigerator. The surface of the river was very clear and transparent. They could see beautiful pebbles beneath the river. I felt that it was very poetic.
Okalapa Grandparents: The Buddhist Way of Life
Okalapa grandparents were also Buddhists, and they respected Sayadaw U Vinaya so much. The time Sayadaw U Vinawa resided at Pyae-Yeik-Thar house (1955-69) as a meditation master, Okalapa grandparents were among those who came and practiced meditation (1960-).

Sometimes they had made a vow to practise meditation once par day for a week or a month at Pyae-Yeik-Thar before Sunlun Sayadaw U Vinaya. One day, Okalapa grandpa was too busy to arrive
Pyae-Yeik-Thar in time. He did not want to break his promise. So, nearly at mid-night, he came as quickly as possible to Pyae-Yeik-Thar, and although the door was locked, he jumped over the fences, and practised meditation before the Sayadaw. Sayadaw U Vinawa was surprised to see him and gave a smile. My uncle told me about this old memory when I prepared to write down about Okalapa
grandpa.

When Sayadaw U Vinaya moved to the new place called ‘Sunlun Meditation Centre’ at 7th mile in 1968-1969, all the family members participated by doing some labor as carrying bricks and sands
for building a new residence for Sayadaw. At that time, Okalapa grandpa had a brand new car. He asked his family to move out from his car, and let them walk, and carried bricks and sand bags on his car. It showed how he respected Sayadaw and his heart was full of joy for having a chance to participate such a great merit to Sayadaw. 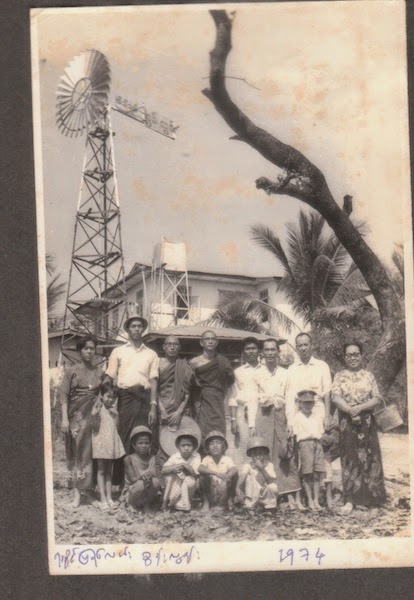 (This photo in 1974 at Sunlun Meditation Centre at 7th mile with Sayadaw U Vinaya (The Third from the left to the viewer), Okalapa grandparents (right from the viewer), my mother’s sister and brother (my aunty and my uncle) (left from the viewer), and I stood between my aunty and uncle, and my twin brother wore a hat near my Okalapa grandpa.)
Okalapa Grandparents: Their Family
Before Okalapa grandpa retired from his work at the age of 47 (in 1964), they lived at NewLyn Road(the Newlyn Road was now called Zagarwar Pin Road) house at Dagon township. It was near Foreign Office, and still existed. The house was a two storey building, and all was made of wood. The very beautiful ancient house indeed! 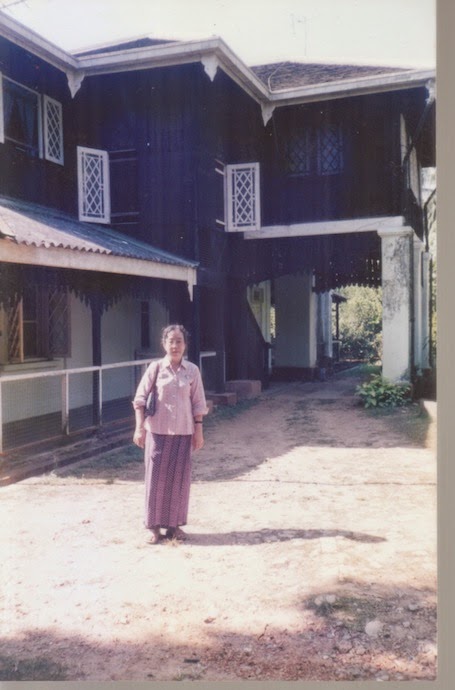 (The very house at Newlyn Road that Okalapa grandparents and their family once lived for 13 years. The photo was taken in 2004 when my mother visited there by chance.) 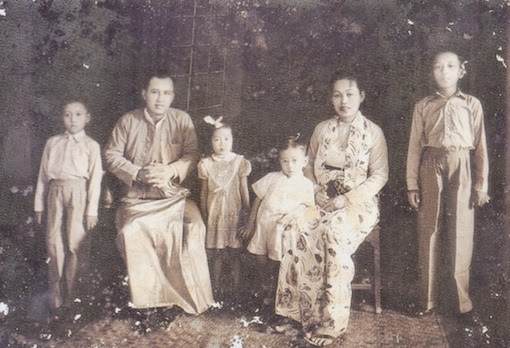 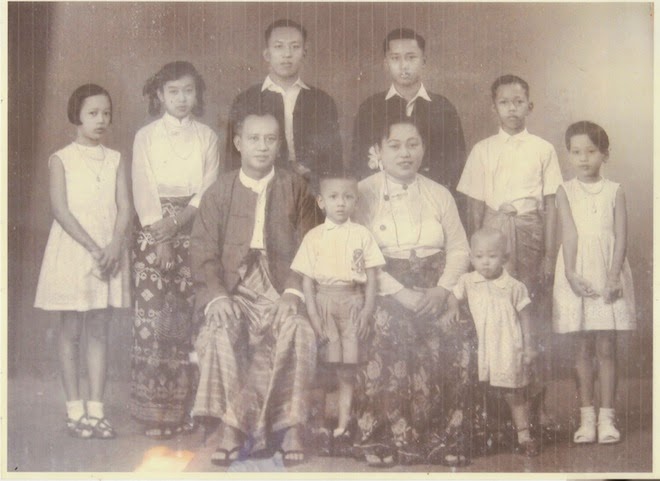 (Family photo of Okalapa grandparents. My mother stood second from the left for the viewer.)
Okalapa Grandma passed away when we were too young. I could not remember about her so much. But whenever I think about her, her moonlike face and ever-smiling lips always appeared before me. I also remembered she gave us strings of beads to tell beads before the household shrine. 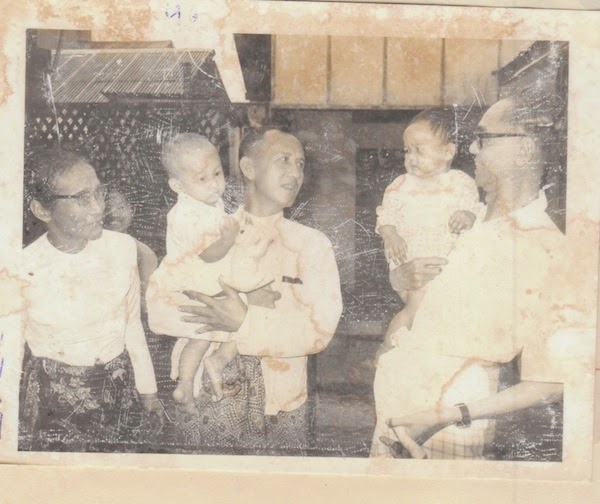 (At Pyae-Yeik-Thar house, with our grandparentsand okalapa grandpa. Okalapa grandpa with my twin brother, and me with my grandpa.)
When we were born, we stayed at Pyay-Yeik-Thar with paternal grandparents. So, we visited to our Okalapa grandparents’ house once per week, or sometimes twice. I remembered Okalapa grandpa let us sit beside him, and opened the storybook, and told the fairy tales. I knew he loved books too. His favorite novels were Charles Dickens. I saw him reading ‘Hard Times’ all his free time. When I was old enough to read a novel like Charles Dickens, I could not find it in his bookshelf. It might be lost somewhere in his house. (Bur fortunately my friend bought it for me as a present. I admitted that ‘Hard Time’ was very hard to read.) 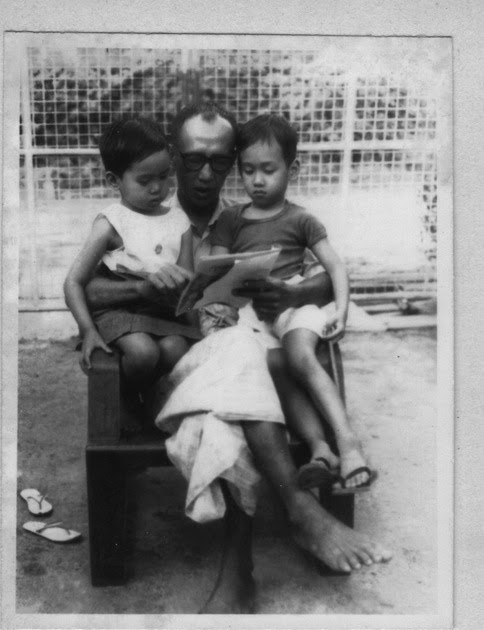 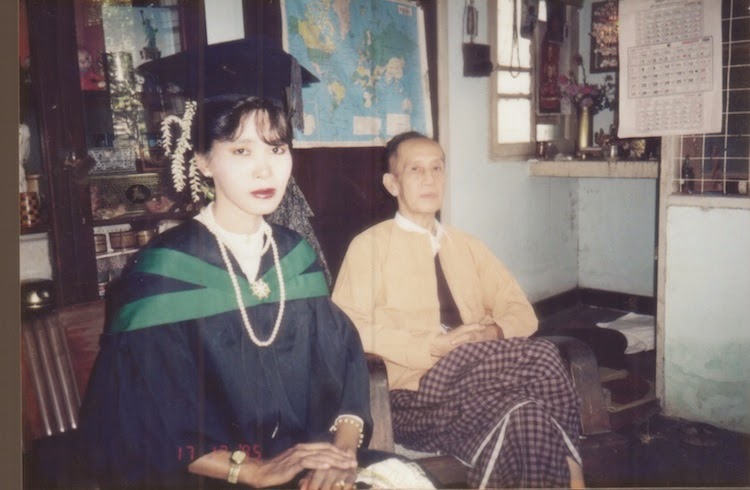 (When I attended my graduation of B.Sc (Hon)(Maths) in 1995, taken photo with my Okalapa grandpa at Okalapa house.)
Epilogue
This part of writing about my maternal grandparents now ended here. I wished to add this article on my coming book as I planned to do for my next issue soon.