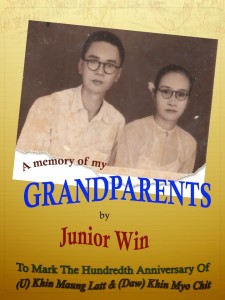 A Memory Of My Grandparents by Junior Win

This ebook is to mark the hundredth anniversary of my grandparents – U Khin Maung Latt (Chief editor of the Working People’s Daily (1963-1968), and (Daw) Khin Myo Chit (writer of Colourful Burma, Anawrahta of Burma, A Wonderland of Burmese Legends). They both were born in 1915.

Grandpa was born in Monywa, Upper Burma, on August 24, and grandma in Sagaing, Upper Burma, on 1st May. They met in wartime, passed through a hard and poor life – they even selling the slippers on the platform of Rangoon city – during the Japanese regime, witnessed the country’s hard time, met several people including writers, poets, journalists, politicians, even the communists.

The idea had been in my mind since the last 1st May of 2014, grandma’s 99th birthday. I must thank my mother for helping me as finding old photos and information from our old library, and my father editing my work, and my twin brother, Maung Yit – cartoonist – who became the publisher of this ebook. Without their help, this ebook would never come out.

The first appearance as a Kindle ebook was the first step of our effort. Hope to see it will be appeared as a book soon. Hundreds of photos I used in the book, and thousands of information historic or non-historic had been dig out from their old memories, will be worth of reading to my readers. 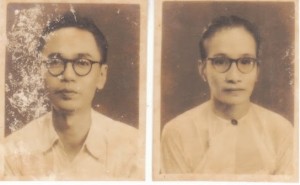 I believe my grandparents are now meeting in heaven or celestial region according to the Buddhist tradition, and I do hope they both see my works, and they might be proud of their stupid granddaughter for digging out their old rubbish memories not knowing which one is to be kept as secret, or which is to be disclosed. Whether they agreed or not, their old memories are now brought to public.  As for me I would be quite satisfied for having a chance to be born their granddaughter and presenting their life as I see it.

Here is the link that the reader might have a sample of the first few pages of my ebook on Kindle store,