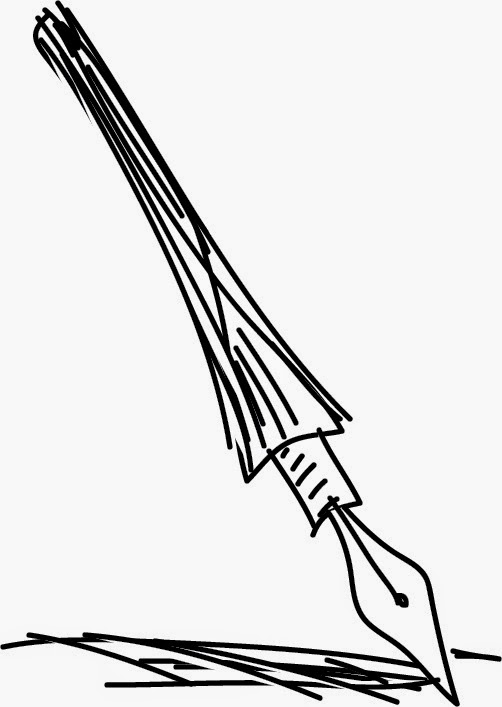 I started to write my book ‘A Memory of My Grandparents’ in May of 2014. At that time, I estimated when I would finish writing, and publish it as digital ebook.  I would finish my book in December 2014, and publish as Kindle ebook in January 2015, and fully publish as a book in March 2015. So, I could have launched my book in May of 2015, to mark my grandparents’ 100 Anniversary.
To appear as a Kindle ebook there was no problem for me. No sooner I finished my book than my brother published it as Kindle ebook. I was sure that my ebook would be published in January 2015. But to publish as a book in my country was beyond my knowledge. I would have to ask someone to help me. I had no experience about it. I was just a writer. I typed my writing, and did all layout design. But I did not know anything about
publishing work. Luckily my cousin who ran as a publisher came and helped me. In 2015 by February, I gave him my typing copies including layout designs. He said if my formats were surely ready in the printing condition, my book  appear in 2 weeks – fourteen days! He was sure that it would come out in the first week
of March if there were no problem between my format and the printing state. Oh! I was happy indeed. 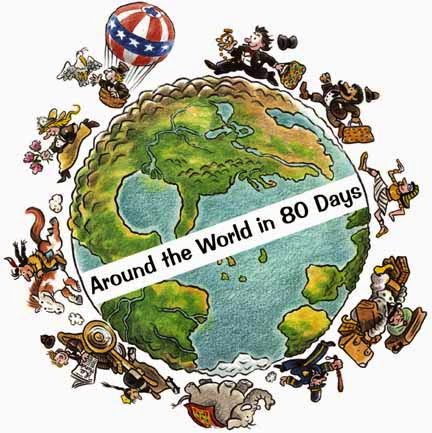 (Mr.Fogges counted all the unseen accidents during his journey.)
So, I calculated all the possibilities that would delay my book as bad weather, contrary winds, shipwrecks, railway accidents and so on. Here, my readers seemed puzzled. You think I seemed mad! No, no…. I just
remembered the book called ‘Around the world in eighty days – Jules Vernes.’ Mr. Fogg whose had habits carried out with mathematical precision, accepted a wager for 20,000 pounds from his fellow club members, which he will receive if he makes it around the world in 80 days. Although he counted the unseen accidental delay as a thousand obstacles, or meeting a thousand dangers, he had almost failed by a brutal act of an awkward detective. Luckily he arrived twenty-four hours ahead of time because of the earth traveling 360 degrees on
the circumference of it eastward toward the sun. Finally, he gained! So, at present, by my calculation, I believed my book appear before the April of 2015. So one month ahead of time my estimation.
After a week later, my cousin said there was a problem in my format.The computer programmer said the size of my pages was too large. It meant I wrongly computed the page size. They could not dare to correct it, because my book included indexes. They requested me to repair them all by myself. I took 2 or 3 days for the hard work. During February, I met other unforeseen problems about the book made me busy, and gave me many sleepless
nights. But I believed I had enough time to do it. My cousin said if all were ready in the first week of March, my book would be fully published in the third week of March. They needed only 2 weeks. Ok! Take three weeks. My book would surely appear at least in the last week of March. 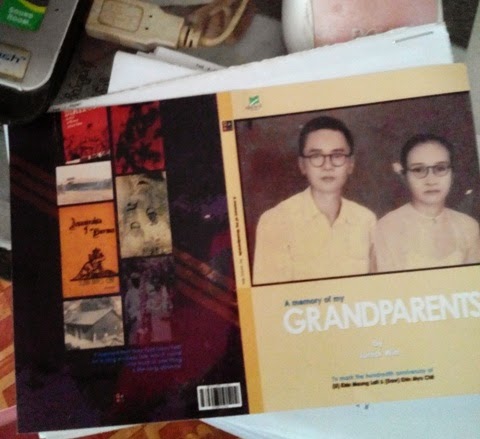 (I received a draft small book of mine in the second week of March. All is well.)
At that time in the first week of March, the Irrawaddy magazine requested me that they were interested in my book and they wanted to write a preview of it for their April Issue. I was sure that my book appear before the Thingyan Festival. I knew that my book was now in the hand of printing work (although it was not my field, I knew that my book would be come out soon…  within 2 weeks!), and book binding house, or so on. In the second week of March, my cousin said because of the electricity, my book would be a little bit late. But surely it would come out in the last week of March as I estimated. He showed me some examples of colourful pages of my book, and we all were happy and excited to see them. 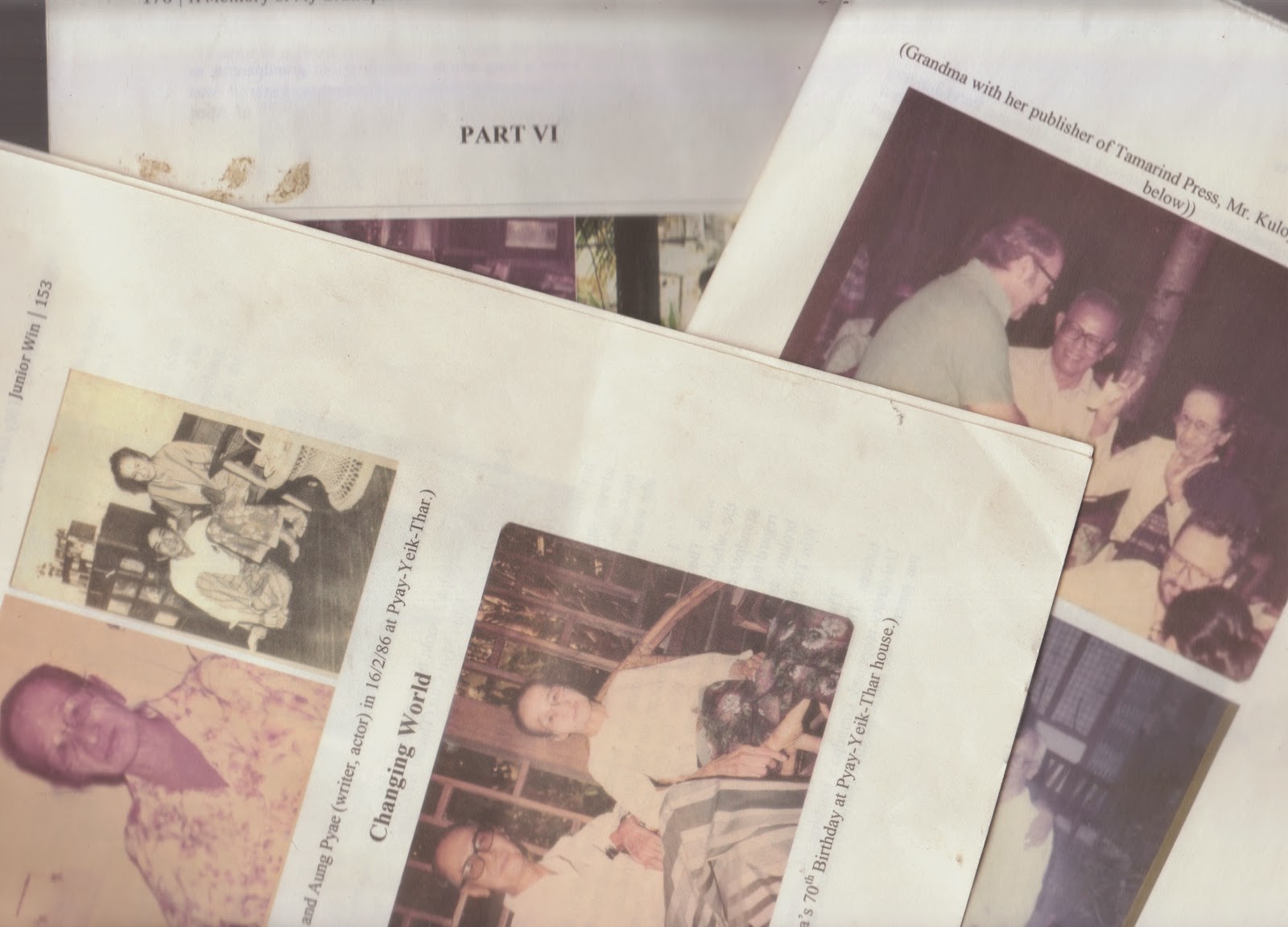 (The colourful pages of my book was seen in my hand.)
I….. I don’t know is there any other problem come again…..?Electricity…. Ok…. No problem at all……I …. remember Mr. Foggs, although he met a thousand obstacles or meeting a thousand dangers, finally he gained it! Now,… I counted all the possibilities which could delay my book, and…. I thought it was enough. But…. This big BUT….
In the last week of March, I was told that my cousin was in the hospital, because he had a very bad stomach ache. I heard that he had to meet an operation, and needed a rest. We all were so worried about him, and encouraged him, and said him not to worry about my book. (Here, if I say frankly, I had a little worry about my book.) Some days later, good news arrived. His father – my uncle phoned us that he was now in a better state, and he did not need an operation. Also said that after more rest, and taking medicines for a few days, he would be in good health. At that time, the April issue of The Irrawaddy magazine comes out, and I saw the preview of my book. I also saw that the author Nora quoted my promise as the book will be in local bookshops before the Thingyan holiday. 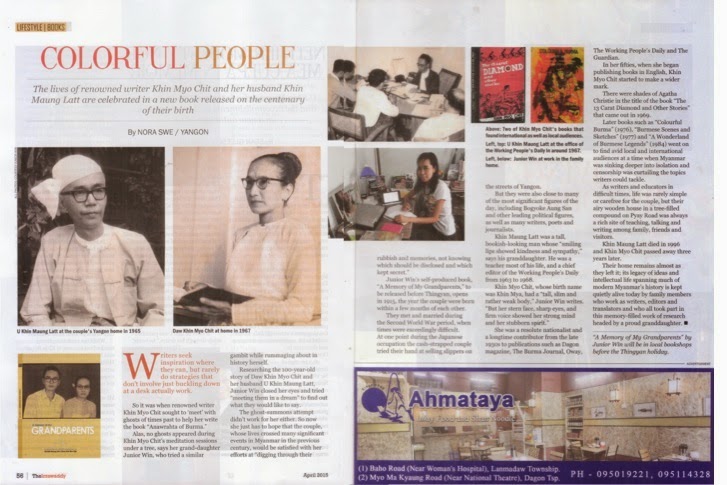 (…’the book will be in local bookshops before the Thingyan holiday.’ was mentioned in the article.)
I hope, I really hope to see my book too, Nora. Now, I dare not push my cousin for my book come out in time…. Or I have not courage enough to ask him about my book…… But I am waiting for my book …..as much as my readers would love to read….. if all the thing goes well, and if the printing procedures or binding state go well, and fine,…. I still hope that my book will be in bookshop before the Thingyan holidays. If not, I only want to apologize to my dear readers…..and Nora….. But I promise if my book come out in time before the Thingyan festival, I will let you know first…….I promise….

← Seasonal Flowers, and Bonus Flowers in the Summer 2015 By Junior Win
The Burmese Word “Bo” and the various Meanings by Khin Maung Saw →