Nowadays, if one asks a new generation-Burmese on the meaning of the Burmese word “Bo“, no doubt his/her answer will be a Military Officer or a Lieutenant of an army unit.  Though it is not an incorrect answer, a Burma Scholar with a wider view would say immediately that it is not a complete answer. So does the present author, because “Bo“ has other meanings too, both positive and derogatory.

One cannot blame the present generation for giving the meaning from military jargon only because Burma was ruled by the military since September 1958 (with the break of 22 months from April 1960 to 1st March 1962) with various names.  Hence, the word ‘Bo’ is more or less monopolized by the military.

Nowadays, almost everybody believes that the Burmese word ဗိုလ္ ‘Bo’ is derived from the Pali word ဗလ ‘Bala’.  Even in the Burmese dictionaries, the etymology of the word ဗိုလ္ ‘Bo’ is given as the Pali word ဗလ ‘Bala’.  However, some experts in the Stone Scripts of the ancient city Pagan like U Tin Htway M.A., M.Phil.(Lond.), the retired lecturer of Burmese language and literature, University of Heidelberg, Germany, did not share that view. He stated that it is a pure Burmese word and derived from ပို “Po”.  In some Stone Scripts of Pagan such as သၡိင္စာခီပိုလ္ (သခင္စာခ်ီဗိုလ္) “Thikhin Sakhipo” Stone Script one can see the word ပိုလ္ “Po” which is the origin of ဗိုလ္ ‘Bo’.

The Burmese word “Bo” means a military officer or a civil servant with administrative authority, in some cases, chief or head or leader of a gang; sometimes the word “Bo” can  also have a bad meaning.  During the Colonial Era all Europeans, especially British, were either military and armed forces officers or civil officers.  Hence they were called “Bo” by the natives at that time.  In that way the Burmese term “Bo” can also have meaning  a male “European” or “Caucasian” (mainly British) and Bo-ma for females.   Bo can also have a meaning of a champion of a tournament.

3.1.1. “Bo” used for a military officer or an officer of any armed force 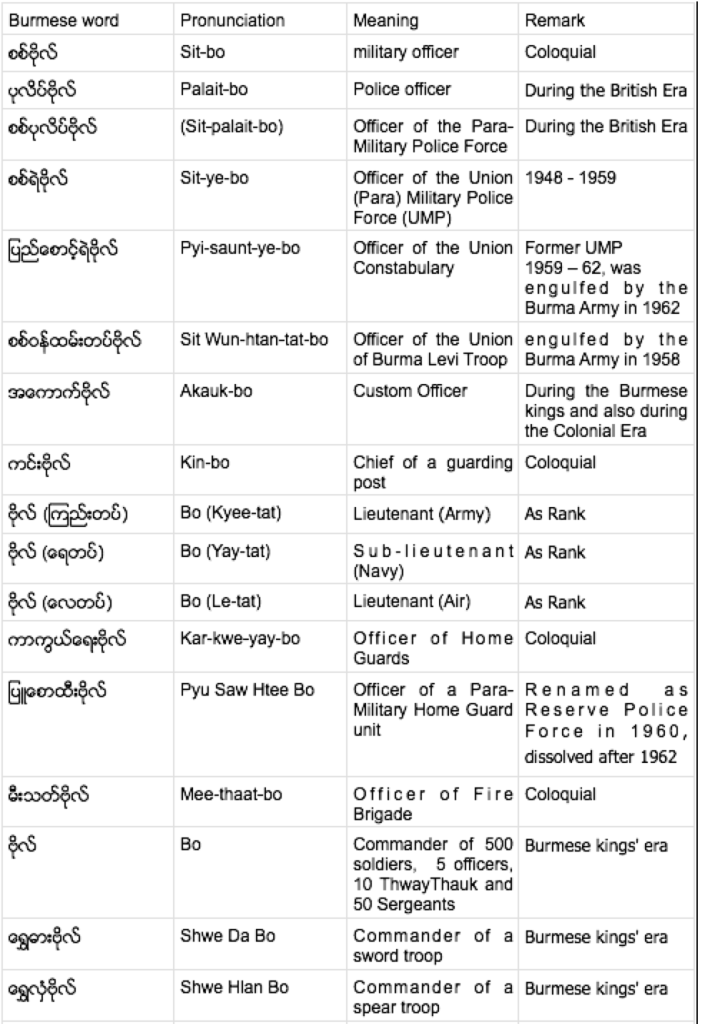 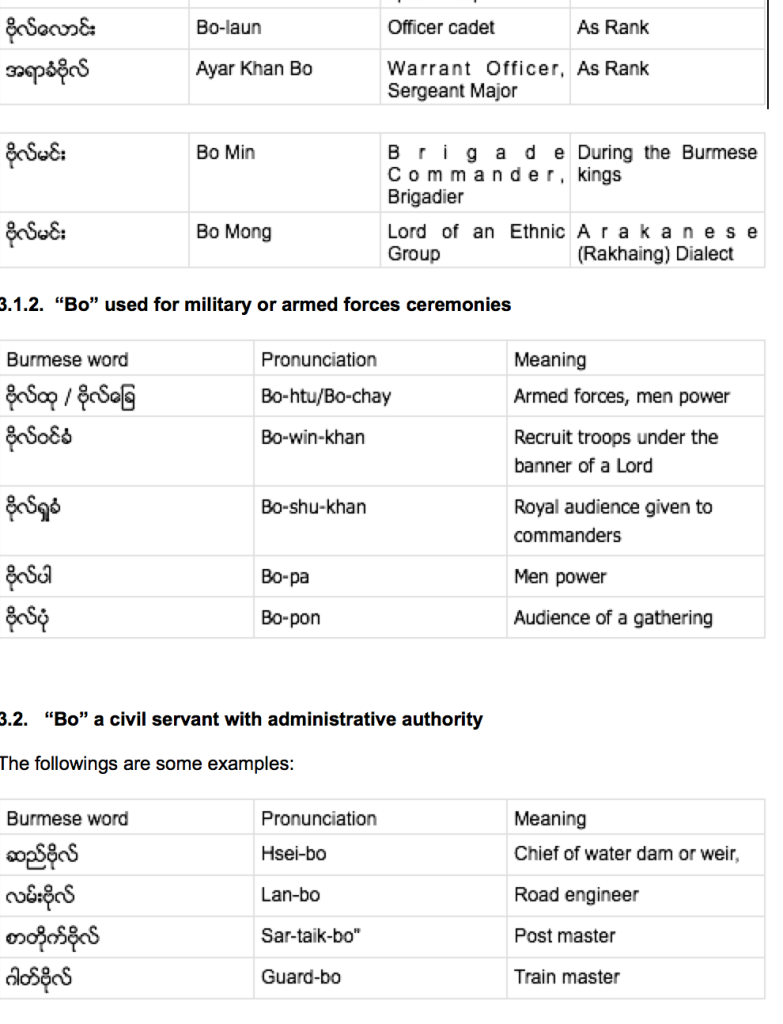 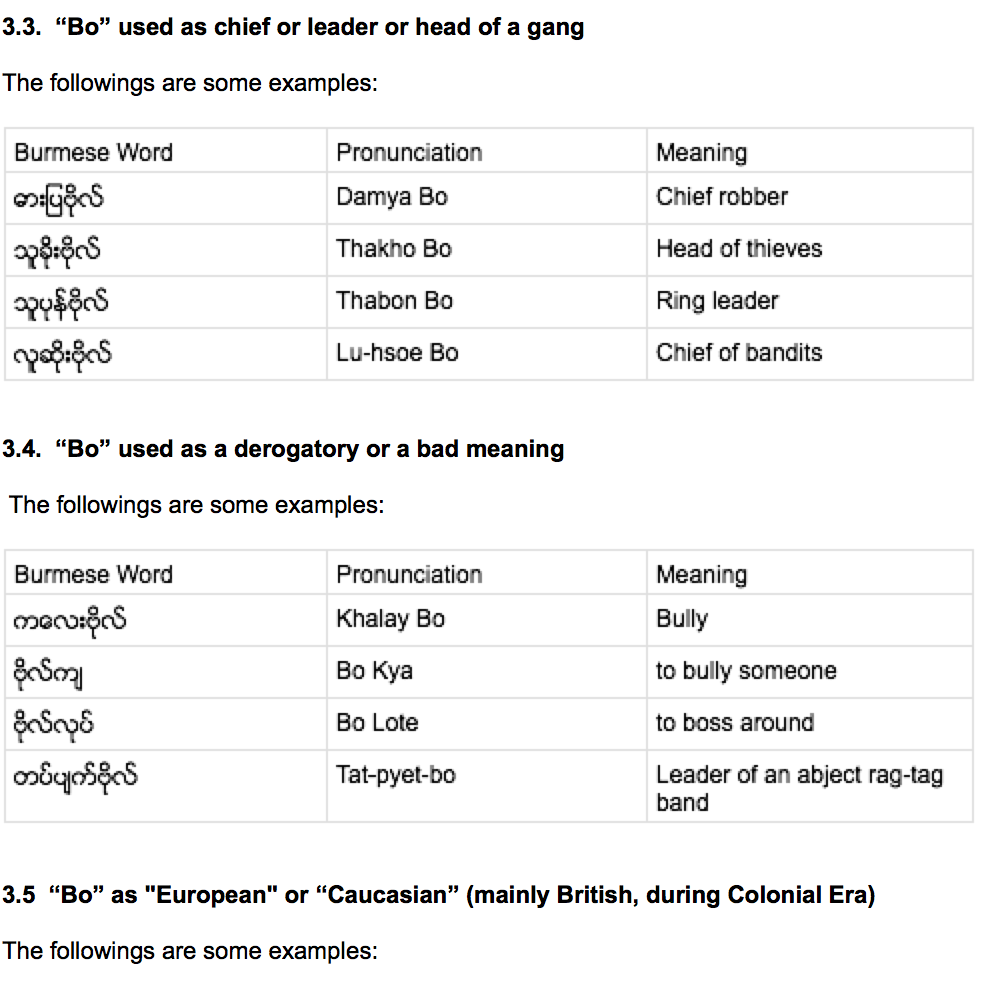 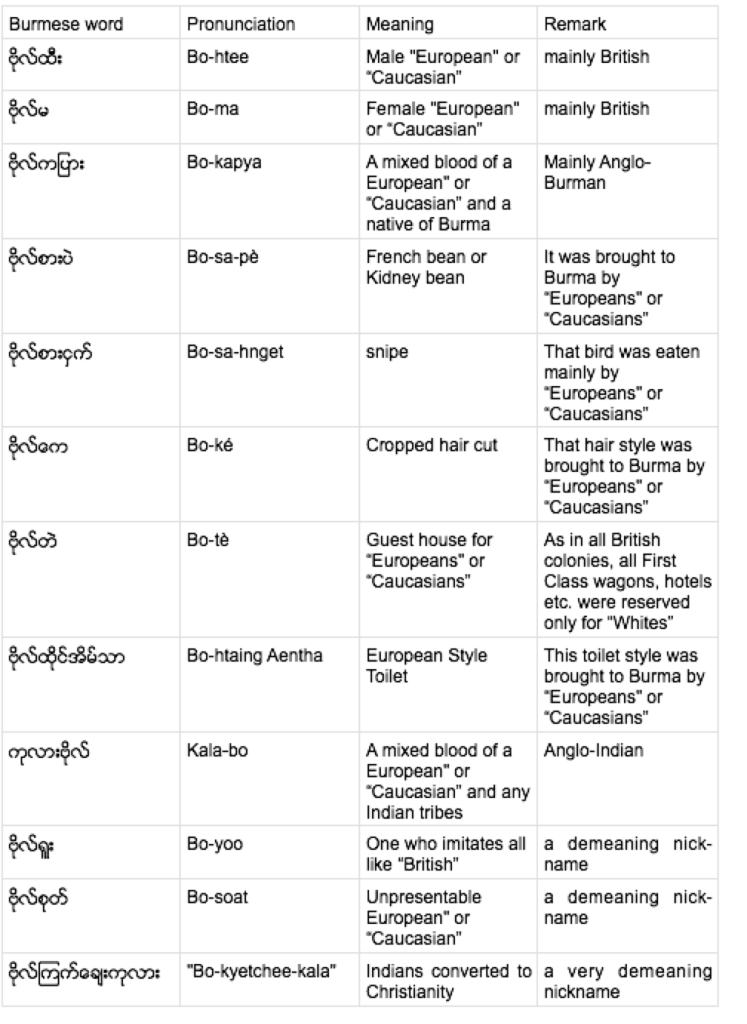 Anglo-Indians are called ကုလားဗိုလ္ “Kalabo” meaning Indian-British Hybrid”.  Some “pure” Indians converted to Christianity, especially Madrasis and Goanese also wanted to be called ဗိုလ္ကျပား Bo-kypya (Anglo-Burmese) or ကုလားဗိုလ္ “Kalabo” (Anglo-Indian) and not ကုလား “Kala” (Indian).  Those people were ultra favoured by the British colonial authorities according to their “Divide and Rule” policy.

Here I would like to cite Dr. Htin Aung, the former rector of the University of Rangoon in the 1950’s who wrote on the Diarchy Reforms introduced by the British in 1923: “In addition, they divided the people in the plain into racial groups, namely Burmese, Indians, Anglo-Indians, and the Karens, on the excuse that racial minorities were entitled to special protection by the British government.  Anglo-Indians included Anglo-Burmese, whose number was small because intermarriage between the British and the Burmese was not common.  The total population of Anglo-Indians themselves was small and the majority of them had come from India; except that they wore trousers and coats and had English names, they were really Indians and could have been classified as such”. (See details: Maung Htin Aung, A History of Burma, Columbia University Press, 1967, p. 286)

Most of those so-called “Anglo-Indians” (“pure” Indians converted to Christianity) did not realize the inappropriateness of that policy. They were so proud of their status and over-acted as if they were more British than the real Englishmen.  Some of them behaved as though they were superior to the natives and their attitudes towards the natives, especially towards the majority Buddhists were terrible and thus antagonism towards them evolved. Therefore they were given a very demeaning nick-name ဗိုလ္ၾကက္ေခ်းကုလား “Bo-kyetchee-kala” which can be roughly translated as “the Indians who call themselves Englishmen but who have the skin colour of chicken shit”.

Not only the natives of Burma but also the Indian (people from the subcontinent) community in Burma (Muslims, Hindus and Sikhs etc.) could not stand the behaviour of those “Anglo-Indians” and typified them with a harsher form of abuse “Suwak-ka-bacha” or “Suwaki-ki-bachi” according to their gender (literal meaning “son/daughter of pig” but here “bastard”) in the Urdu language.

3.6  “Bo” as champion or grand-master of a tournament 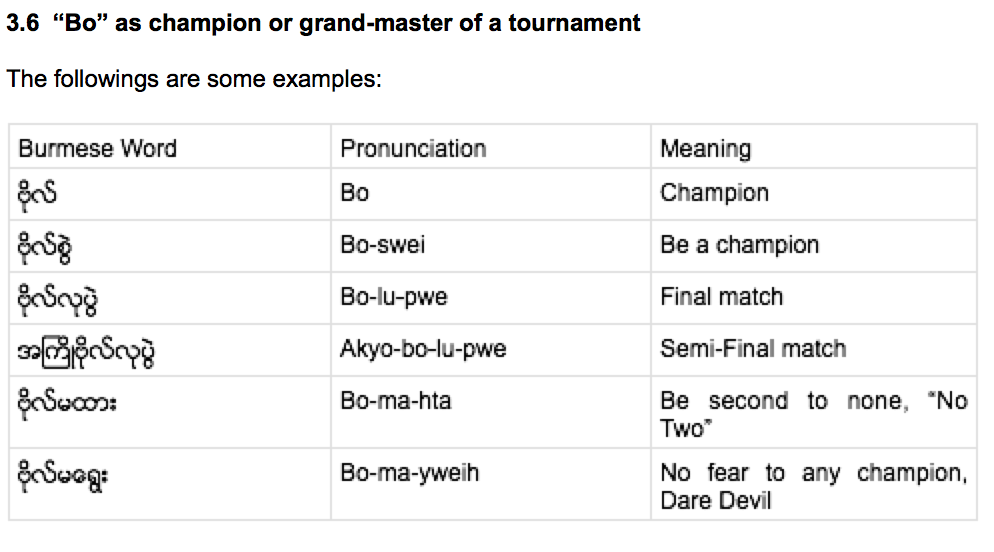 4.  Deviation of the meaning ‘Bo’  in Burmese Army nowadays

The term ဗိုလ္မႉး “Bo Mhu” had the meaning ‘Supreme Commander’ or ‘Commander in Chief’ of the ‘Royal Armed Forces’, so the rank was roughly equivalent either to a general or even to a field marshal.  The title of the famous Burmese general during the First Anglo Burmese war (1824-26), Maha Bandoola,  was ဗိုလ္မႉး “Bo Mhu”.  The second-in-command under Bandoola was Myawaddy Mingyi U Sa.  His rank was  စစ္ကဲ Sitkè, which could roughly be equivalent to a Lt. General.  Only the third in hierarchy was called ဗိုလ္ခ်ဳပ္ ‘Bo Gyoke’ which could be equivalent to Major General nowadays.  A rank lower than ဗိုလ္ခ်ဳပ္ ‘Bo Gyoke’  was called ဗိုလ္မင္း “Bo Min”, which most probably could be equivalent to a Brigadier or Brig. General.

Since Burma became a British colony in 1886 there was no army for the Burmese.  Later, when the British-sponsored ‘Burma Rifles’ were established, the bulk of the soldiers in the British-trained Army were of minority ethnic groups such as Chins, Kachins and Karens.  Most of them were “Converted Christians” from their natural beliefs.  It cannot be ruled out that it was part of the ‘Tactic and Strategy’ or ‘the Policy of Divide and Rule’ of the Colonial Masters then.  In any case, the British Rulers never trusted the majority Buddhists population of Burma, especially the majority ethnic group, the Burmese.  The Burmese were rarely accepted in the armed forces before the First World War.

As a result, the new generation of Burmese born at the beginning of 20th century did not know the “Burmese Military Jargon” anymore.  When Aung San established the Burma Independence Army (BIA) with the help of Japanese in 1941 the top leaders of that army did not know the “Burmese Military Jargon” anymore and translated ဗိုလ္မႉး “Bo Mhu” as the rank of ‘Major’ instead of ‘General’.  In fact, Aung San would have got the title “Bo Mhu” instead of ”Bo Gyoke”,as he is known later.

5.  “Bo” monopolized as military terminology after 1962

Similarly, the officers from the rebel forces were never mentioned as ဗိုလ္ nor their ranks in their forces like general, colonel etc. etc. were neither recognized nor mentioned.  For example, the name of General Mya of the Karen Forces were written only as “homonym” in other orthography ဘိုျမ instead of ဗိုလ္ျမ, the correct spelling.  When the liaison officer Colonel Hla Min of the Burmese Army met the Karen General, Bo Mya, for peace talks at the early 2000s he addressed Bo Mya as “Uncle Mya”.  It seemed to be a very polite addressing because Bo Mya could be at the same age of an uncle of Colonel Hla Min, however, in the reality he neither wanted to address a general of a rebel force with the military jargon “General” nor wanted to salute him.

The same thing happened later when General Khin Nyunt, Chief of the Burmese Military Intelligence and the then prime minister of the military regime met Bo Mya in Rangoon.  Khin Nyunt called Bo Mya “Pha-htee” (Uncle in Karen language).  This time Bo Mya retaliated back by calling Khin Nyunt ‘Pho-doe’ (Nephew in Karen language), instead of addressing him Gen. Khin Nyunt, as “tit for tat”

A rank higher than a Four Star General is Field Marshal. The definition given in Wikipedia is: “Field Marshal is a very senior military rank ordinarily senior to the general officer ranks. Usually it is the highest rank in an army, and when it is, few (if any) persons are appointed to it”.  There is no Field Marshal in the US Army, instead that rank is called a Five Star General . Gen. Douglas MacArthur  and Gen. Dwight D. Eisenhower were Five Star Generals.  Promotion to the rank of Field marshal or Five Star General required extraordinary military achievement by a general  such as a wartime victory.  Until 1988, Field Marshal was translated either စစ္သူႀကိီး ‘Sit-thu-gyi’ or ဗိုလ္ခ်ဳပ္မႉး ‘Bo Gyoke-mhu’, however, the latter translation was rarely used, the first one was more common.  Some famous Field Marshals during the First Wold War, Paul von Hindenburg (Germany),  Philippe Pétain (France) as well as some famous Field Marshals during the WW II Bernard Montgomery (Great Britain), Erwin Rommel (Germany), Hisaichi Terauchi  (Japan), Georgy Zhukov (Soviet Union) were translated as ‘Sit-thu-gyi’ .

There is another army rank called Generalissimo, which is the military rank of the highest degree, superior to field marshal and other five star ranks  in the countries in which they are used. Chang Kai-shek from China and Fransisco Franco were Generalissimos. Generalissimo was transliterated into Burmese as “ဂ်င္နရယ္ လစ္ဇီမို”.

Hence, here are some riddles to solve!

I will leave these open questions for you, dear readers!

The Burmese word “Bo” means a military officer or a civil servant with administrative authority, in some cases, chief or head or leader of a gang; sometimes the word “Bo” can  also have a bad meaning.  During the Colonial Era all Europeans, especially British, were either military and armed forces officers or civil officers.  Hence they were called “Bo” by the natives at that time.  However, since Ne Win’s Era, the military wanted to monopolized that terminology only as a military jargon and they even tried to change the orthography of “Bo” ဗိုလ္ to the homonym ဘို if the word is used for other meanings apart of the military jargon and a champion.