From 3rd to 14th October of 2015, Logos Hope Books Ship (Good
books for all) – a ship that was full of books – arrived Rangoon, Burma, at Alone International Port Terminal. It was a big chance for book lovers and bookworms. We were long-time hungry for books, ready to go and see there, and hoping to have an enjoyable and happy moment.

Book shops in Rangoon were rare to see. If one be found in some road and street or at some township, hardly to find my favorite books there. I gave up many times finding my favorite Ray Bradbury and some Science fiction books. If my friends lived in foreign country asked me what I needed, I replied them to bring books. I always
remembered what my father said, what he admired most in foreign country was availability of books.

Logos Hope was coming to town

Book lovers were planning to meet the ship. My mother dreamt Dr.Seuss’
latest book, and some of his series to find in Logos Hope. I too was so excited to go and browse at such a great, and big books ship with thousands of books in one place. I listed some books which I hoped to buy at Logos Hope – the place would be the most beautiful things I would have never seen.

Be patient, and see

To reach the place where Logos Hope harbored, we would have to take at least one hour and more by taxi because of traffic blocking. My father did not want me to go there. He said it was not a good thing taking many hours just to buy books. But father, it was a rare chance for us.

Difference between foreign countries and ours

My father said there were book shops everywhere in France and England he once visited where everyone go and buy books easily. Sometimes there were special book sales anyone can buy with one dollar and carry the books as much as you can in one time with your hand from the shop. No worry about the books, go there and take books you wanted. But father…. we lived in Rangoon, not in France or England. Beggars cannot be choosers. If our country have plenty of books, and book shops like foreign countries as you ever said, I believed I would have no interest in Logos Hope. However Amazon could send books by online shipping nowadays, our country was still out of reach to have the chance.

The ship was very big!…. the photo I saw in the news. Inside the Logos Hope, there were never-ending book shelves, and the every-colored books….. that I saw at Facebook. People comfortably browsed books inside the Logos Hope…. I saw at news and media. So I was decided to go there. I hoped it would be worth going.

How sad to see such a row of people waiting outside for entering the gate of the port. They seemed have been waiting longer than me. I did not see any sign of Logos Hope books ship. It means I had to behind the other to join the queue! However I was hungry for books, I did not want to stand in a row in order to wait under the hot, and
risky sunny earth, and give an hour or more just for entering the gate! I now fully understand why my father did not want me to go there. 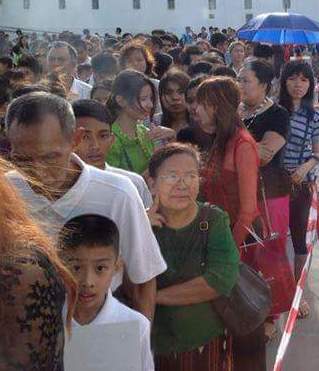 (My friend sent me the photo of people inside the port still queuing for entering Logos Hope.)

I later heard from a friend of mine waited for 3 hours outside the gate, some were not allowed to enter because the time was up! (Although it was announced opened until 6:00 PM, it closed the gate at 5:00 PM). I was decided to go back home as soon as I saw the crowd.

It might not be crowded next day, someone told me. No, I would never try again. Our country, our poor country, a country poor in books……

I finally decided I should have to go and find a book shop in Rangoon where Logos Hopes’ books would be sold.  From now on… Good bye Logos Hope…..