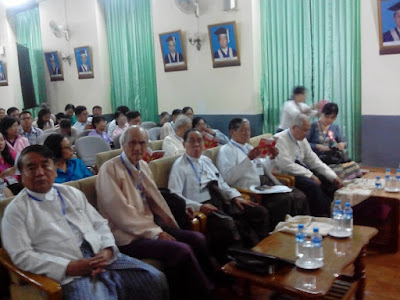 The conference has held at the Arts Assembly Hall of Yangon University, from December 4 th to 6 th . It was held daily from 7 am to 5 pm . In_between there were lunch and tea breaks.

The opening speech was given by Dr Thein Myint,President ,Myanmar Academy of Arts and Science . The speech was on Situation of Teaching and Learning Mathematics in Myanmar.In the speech,the system of tertiary education in Myanmar from 1920 ,through 1948 when the country gained independence until 1962,then the new system when the major system was established in 1964,with emphasis on teaching and learning of mathematics were discussed. Then the president went on to describe the launching of doctoral programmes at the university of Yangon ,and then the university of Mandalay, and the emergence of autonomous universities.

Since there are no written records of this paper,I have to write everything from memory which can fail me and I may have confused it with another on the same subject.During the question time I said that I am a very bad chess player.Even my friends remarked that the way I played chess cannot be called playing,because all I did was moving the pieces at random according to the rules.In such a case,am I an equally bad mathematician and what have I lost with regards to Mathematics Education ?

In answering the question,the professor said that the rules for playing chess are very much like Mathematics and that the famous mathematician David Hilbert was a very good chess player.

The next paper was presented by professor Takeyuki Hida,Emeritus Professor of Nagoya and Meijo University.The title was Let us use White Noise.The paper began with the statement- The White Noise is not a noisy noise around the house.

So far as randomness is involved.It plays the most basic roles in modern probability theory and statistics. Given a random phenomenon we wish to find a system of random variables Xi which express the random phenomenon in question as a function of them. There can be various applications of white noise in information theory,because white noise is the besr carrier if information.

The professor gave a quotation which reminds us of the Myanmar saying;- The noise of the carts’ axels , that number of Pagodas in Pagan. The professor’s quotation was – When tte cart moves,it makes noise,the cart cannot move without making noise, and yet the noise has no use in moving the cart.

The paper reminds me of the time when I was learning Physics in high school. I heard the definition of sound given as the sensation of hearing perceptible by the ear . If it comes from a layman,the definition is quite acceptable,but coming from a physicist,it is,to say the least , disappointing.If I was given the time I would have liked to ask if the professor shares my feelings or has feelings contrary.

After lunch break,Professor Luigi Accardi of Centro V. Volterra presented his paper of which there is no written record.If I had time,I would have liked to ask him about the name Volterra which is well known in the field of Integral Equations.

The next paper was titled The Coming Age of Mathematics Education as an Academic Discipline and the Role of Scholars from Developing Countries in the Process. It was presented by Professor Frederick Leung of the University of Hong Kong.In the paper it as stated that Mathematics education is a young academic discipline which only started in the middle of the last century.The earliest international journal called Education Studies in Mathematics was first published in 1968.The first international Congress on Mathematics Education took place in 1969 and on important resoulation passed was a need for a theory in mathematics .

During the question time,I discussed the importance of the history of mathematics as an important part of mathematics curriculum.There is also a need for other subjects like philosophy , psychology, evolution theory, astronomy, political science , biology, etc.

If there were more time,I would have liked to ask how much emphasis should be given to giving particular examples to illustrate a theory.I would also have liked to discuss what my teacher U Ko Ko Lay said on the subject.He said that giving illustrative examples to illustrate a theory is illuminating,but it has the danger making the students think (wrongly) that the examples provide the proof of the theory.

It reminds me of what Poincare said on the subject – Millions of examples does not prove the truth of a theory,but a single counter example will disable an accepted theory once and for all.

The next paper was White Noise Analysis and Levy’s Functional Analysis by Dr SiSi,Emeritus Professor , Aichi Precectual University. In this Dr SiSi gave the mathematical concepts of White Noise.The mathematical definition of noise as a system of independent idealized elemental random variables containing the same information as the given phenomenon.She proposed solving a whitening equation using the various tools from White Noise Analysis. Applications of the whitening theory can be found in studies such as general stochastic differential equations Gaussian Prosses, functional of a new noise and so on.This paper is devoted to the mathematical concepts rather than on physical phenomenon.

The second day of the conference. 5th December opened with Stein’s Method by Louis Chen,Department of Mathematics,National University of Singapore.Charles Stein is the name of a professor of Stanford University who introduced a new method of normal approximation.