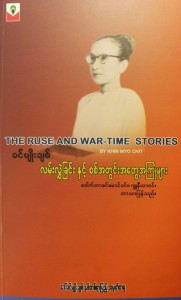 (PREFACE TO QUEST FOR PEACE by Dr. Khin Maung Win)

There have been many drafts of Quest For Peace under many different titles.The final draft is now known as an autobiography of Daw Khin Myo Chit.However,when it was first written ,it was not really meant to be an autobiography.It was meant to be her memoirs on Sunlun method of Buddhist meditation :- on how she regained her faith in Buddhism because of the Sunlun method.But to recount how she regained her faith, she must tell the story of her Buddhist childhood when she believed that a Buddhist life was the only good life under her grandfather. Then the story of how she outgrew the childhood beliefs in the middle life and finally how the Sunlun Method of Buddhist Meditation changed her life are told.Only then will the picture be complete.

I have said that there have been many titles for Quest For Peace.I remember only two – namely Many a House of Life Hath Held Me and House of Life . The first title is the first line of the poem by Sir Edwin Arnold which runs as follows :

Many a house of life

Hath held me _ seeking ever him who wrought

These prisons of the senses, sorrow-fraught ;

Sore was my ceaseless strife !

Thou Builder of this Tabernacle — Thou !

These walls of pain,

Nor raise the roof-tree of deceits , nor lay

Fresh rafters on the clay ;

Broken thy house is ,and the ridge-pole split !

Regarding the two titles,there was a great argument between two great scholars of English language, namely Mrs. Godwine and U Win Pe ( Mya Zin ) both of whom for which my mother had great respect.One preferred the poetic title because it attracted the readers’ attention.But the other preferred the simple one because of the seriousness of the subject.Having great respect of both of them,my mother did not know what to do.

According to Buddhist Thought, House of Life means the body which holds life and the senses.The first line : Many a house of life hath held means that there have been many many births,re-births and lives which have held one to this Samrara ,the Pali term meaning the round of re-births which make this world.’The builder’ means the Tahna,the Pali term which means ‘love and attachment’ which binds one to this Samsara.Once love is conquered there shall be no re-birth , or poetically speaking sans re-birth,sans life,sans sorrow,sans pain,sans suffering, sans everything.Now,I remember another title which mother thought of _ namely These Walls of Pain.But she decided against it because the title would need an explanation.

Finally,the autobiography was serialized in the daily newspaper The Working Peoples’ Daily ( WPD ) in 1964 under the title Quest For Peace.

Now,it is the first time the auto-biograhy has been published in book form.It is not for lack of trying on the part of the writer that it had not been published before.The main cause has been the great difference of interest on the part of the publishers and the writer.As it has been said at the beginning,the work was meant to be a memoir on Sunlun method of meditation : her childhood life as a devout Buddhist,her loss of faith in Buddhism and all religions for that matter,and regaining of her faith because of the Sunlun Method.However the interest of all the publishers was only in her political life which was just a by-product and nothing more.The publishers even suggest that she scrap everything to do with Buddhist meditation and give a more detailed account of her political life for which the author has a very low opinion.