(Grandma titled, ‘Will you ever know what you have lost?’ at the Working People’s Daily newspaper in the July of 1975 about the earthquake that destroyed the old pagodas of Pagan.)

My grandma, Khin Myo Chit – writer of Colourful Burma- wrote ‘Will you ever know what you have lost?’ at the Working People’s Daily newspaper in the July of 1975 about the severe earthquake that destroyed many of the old pagodas of Pagan. In the article, she lettered to her grandchildren that she was so unhappy for hearing the news of the earthquake strike at Pagan where she was dreaming of taking her twins-grandchildren to enjoy the historical place of Pagan.

The earthquake so happened at the evening of 6:35 PM on the 7th May of 1975. She always said to me that her great grandfather, great scholar, and archaeologist, taught her to love Pagan. Because of his teaching, and explanation of archaeological discoveries of old Pagan, she could later write a historical novel ‘Anawrahta of Burma’ (King Among Men) – history of the old Pagan King. I read many times the book, and was thinking that one day I would be there and see the remarkable places that my grandma had high-lighted in the book.

But I visited at the first time to Pagan after my grandma passed away. At that time, I listed the names of the historical places, and pagodas that I was planning to go. I believed my grandma saw me from heaven, and would accompany the visit with me. 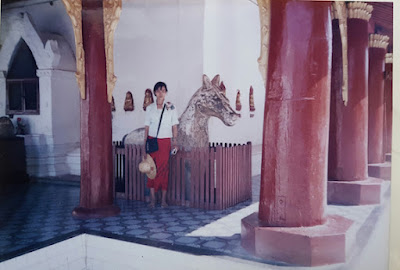 (I visited the place where the statue of the royal horse of King Anawrahta (Pagan King) stayed at Shwe Zee Gon Pagoda.) 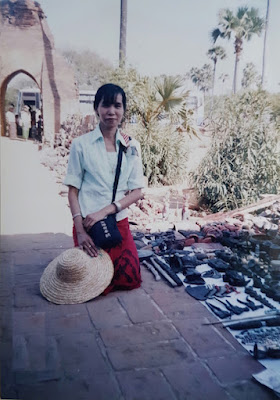 (All the souvenirs that I met at Pagan, I still remembered and missed them.)

I learnt from the natives that some remarkable places had been destroyed and lost. They showed me some old pagodas that had been destroyed, and some notable pieces that were lost, and some historical fragments that were no more. Here, I whispered; ‘Grandma…. You will never know what we have lost? Not because of the earthquake of 1975, but because of human destruction.’