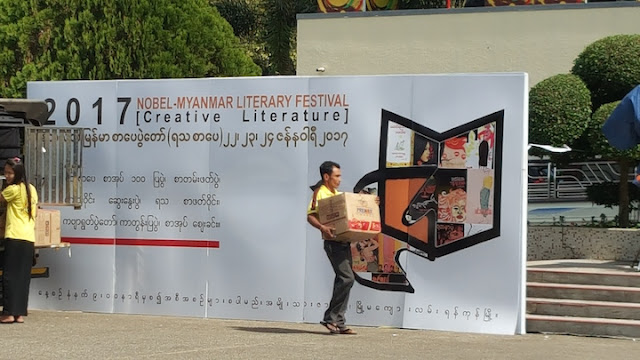 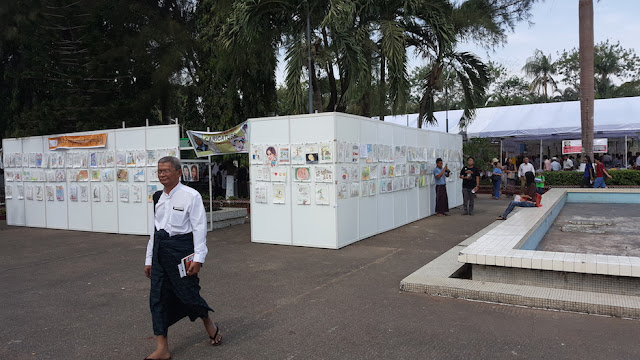 (Cartoon corner)
The cartoons corner, photos corner, and talk corners seemed interesting places to everyone. The weather was so hot. People could not stand long at the cartoon corne. I think it would be more crowded in the evening.

(Eating place for every visitor.)
The lunch corner was full in the afternoon. The tables and chairs were not enough for everyone. People were queering at the small eatery to buy Burmese cuisine. There were cafeteria, Chinese cuisine shop, and moke-hninn-khar shop (Burmese special soup with fish) at the eating-place. The sun was strongly entering into the place, so we could not eat at the table comfortably. 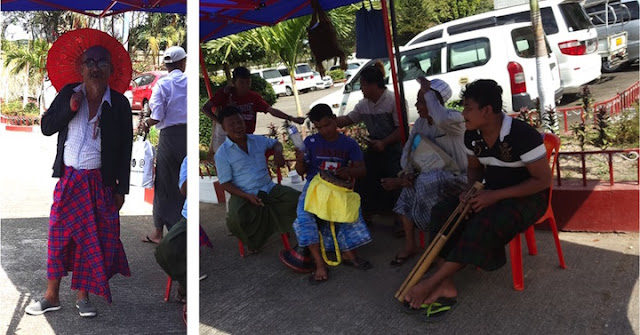 (A man with an umbrella, and his musical troop.)
I also saw Hta-me-ne (glutinous rice) at the corner with a man U-Shwe-Yoe dancing, and his troop was entertaining with their musical instrument. A man wore U Shwe Yoe dress with Pathein (Basin) umbrella. It was a Burmese traditional men dress. 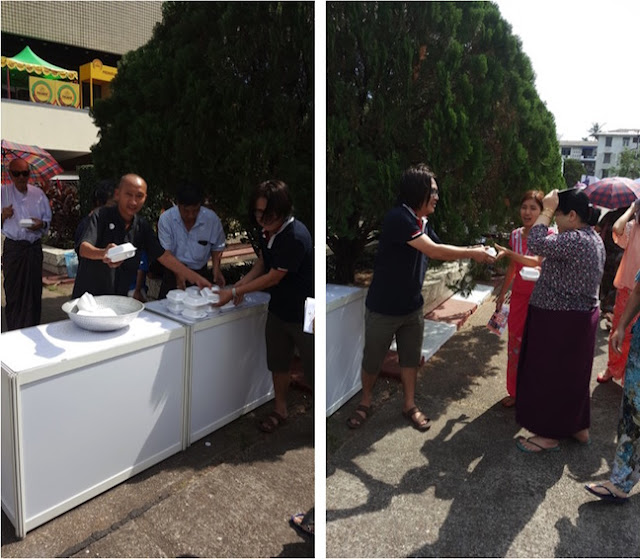 (They welcomed all to give their precious Burmese food.)
They welcomed all to come and freely take their delicious hta-me-ne food. It was called Dhanna (giving) in the Buddhist way of life. They were very pleased to give their food to every visitor. Hta-me-ne is the seasonal Burmese food. When Ta-Po-Twe (Burmese month for February) comes, Burmese people are participating Hta-me-ne making at the pagoda, or at the streets, or at their houses. Now I saw Hta-me-ne here, a little earlier than its season comes.

(A white board showed the program for 3 days schedules.)
There was a board on which the program was shown who would come and talk. So, people could choose their favorite subject and speaker from the program. 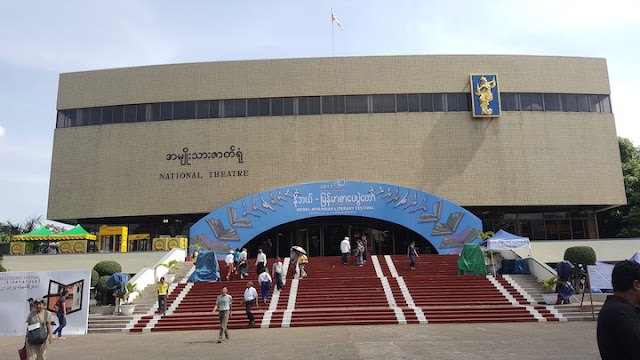 (National Theatre stood under the hot sun.)
At the end of the red ladder, there would be photos exhibition and talk-shows inside the building.  At night, there were plays and music performances at the theatre.

← The Night She Rest In Peace; Longing for a Burmese Poet – Kyi Aye (by Junior Win)
Pre-Centeniel Anniversary of Rangoon University by Junior Win →