On the 1st January of 2017, the ten-year memorial of the Burmese poet U Tin Moe, was held in Rangoon, Burma. 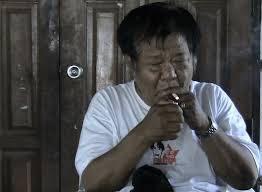 He was one of famous poets in Burma especially in his writing on poems for children. His poem, ‘A girl with a red umbrella’ in Myanmar was a long-time-remembered poem in our young memories. 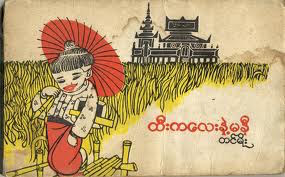 (‘A Country Girl with a Red Umbrella’ by Tin Moe.)

He visited our house very often to meet our grandparents. I still remember he was kind and always smiling. A cigar he always smoking later became the symbol of his figure. His poem, ‘Guest’ in Burmese was very popular among his fans. 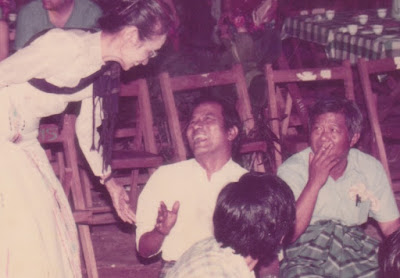 (One of Htamene (Harvest) Festivals at our house, U Tin Moe with cigar looking at my grandma khin Myo Chit who was talking with Maung Thar Noe – writer.)

In the 1988 demonstration in Burma, his life changed. He stood by the side of students, and people. He wrote poems to encourage them. Because of his chosen right, he was imprisoned for 4 years in 1991. At that time, his poems, even his name was banned in the magazines, newspapers, etc. After he was released, he was afraid to be imprisoned again. He heavily decided to leave Burma, and stayed at United State. At that hard time, not alone he, many students, and some Burmese people left Burma for their safety. 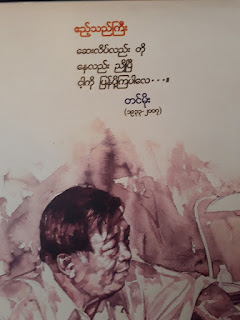 (The poster illustrates U Tin Moe and his famous poem ‘The Guest’.) 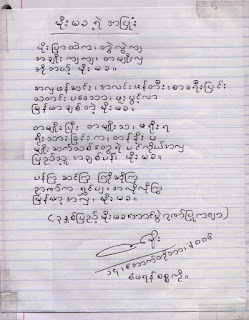 (The poem he wrote to Moemaka Online Media he used to write while he was staying in US, and his signature on 14th October 2006.)

He wrote articles, and poems on abroad longing his motherland. He wanted to return home and die at his land. From his writings, we knew how he missed his country. When my grandfather passed away, he wrote a poem for him, and sent to us.

He hoped he would come back one day and give respect to Shwedagon Pagoda, and meet his long-time-no-see friends. But he passed away on January 22, 2007 in Los Angeles, California at the age of 73. His family kept his remains, hoped to bring to Burma one day to fulfill their father’s long-wishes.

(His home-sweet-home, and his remains now arrived safely on the 28th December 2016.)

(His funeral held on 29th December 2017 at the graveyard, Rangoon, Burma.)

On the 1st January of 2017, the ten-year memorial of Burmese poet U Tin Moe, was held at Royal Rose Garden, in Rangoon, Burma. 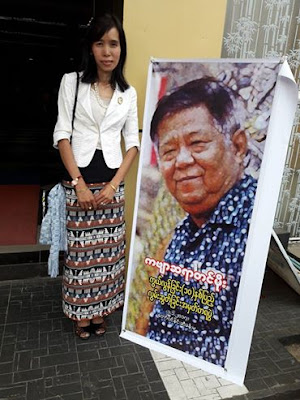 (I was attending his memorial at Royal Rose Garden on 1st january 2017.)

(His friends, and his admirers attended the memorial of U Tin Moe held on 1st January 2017.)

(His comrades, friends, and family gave a talk how they missed their old friend at the memorial.) 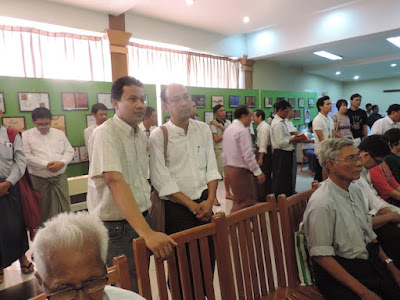 (His fans at his memorial.)

Not only his families, but also his friends and his fans missed him, and remembered him as long-time poet of all time.