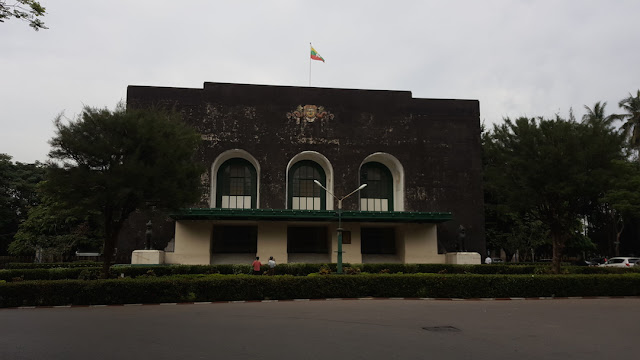 (My heart leaps when I saw Convocation Hall. It looks gloomy, and told me old memories.)

Pre-Centeniel Anniversary of Rangoon University – 96th Anniversary of Rangoon Arts and Science University (RASU) – was held from 6st to 9th December of 2016, in four years’ time. Books sales were opening for 4 days in the Campus. Bookshops were under the temporary roofs at nearby and around the lawns of the remarkable places such as Thit-Poke-Pin (Tetrameles nudiflora), Arts and Science Assemblies, Recreation Centre (RC), and Library, etc.

People came and enjoyed wondering around there. Bookshops, photos-exhibition, caricatures, and old-books-sales were seen interestingly attract to the visitors. People by coincident met their old friends in the campus, and had a never-ending talk. I believed University of Rangoon meant to every one. 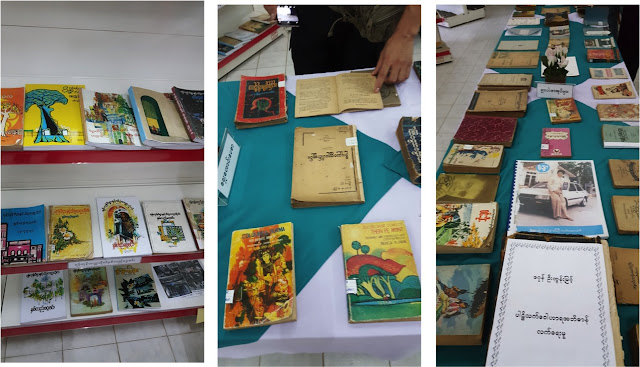 (Precious books, and documents. Among them I saw my grandma’s book ‘Burmese Scenes and Sketches.’)

(Inside the library, displayed memorials, and people copied it.)

Inside the library, annual University magazines, photos, old manuscripts and handwriting were orderly displayed on the table or at the bookshelves. People were excited to see them. Some copied it, and could take photos freely. 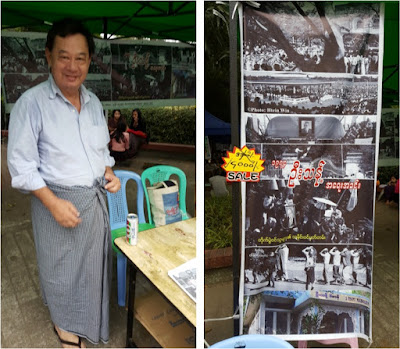 (Htein Win – Photographer, and his historical records of students’ actions during in December 1974.)

I met one of well-known photographers Htein Win (photo) at the corner. He showed me the book, which was a collection of his photos of U Thant’s funeral (1974), taken 40 years ago while he was witnessing the ceremony in the December 1974. (U Thant – former secretary general of the United Nation from 1961 to 71). He kept his photos for more than 30 years, and now put out to public. 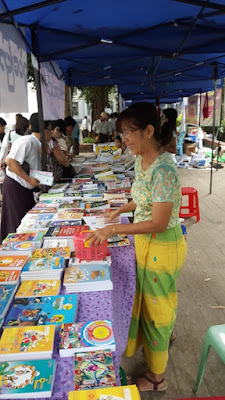 After hours wondering around, and having lunch, meeting my old friends, I lastly looked at the back side of the bookshops still remained busy. Hope to see again, farewell!

(What a nice view of bookshops stayed in peace!)