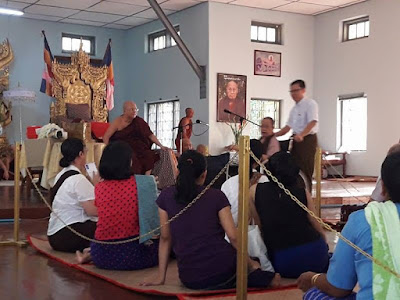 (It was grateful for Sunlun Sayadaw, born on the full moon day of Kason.) 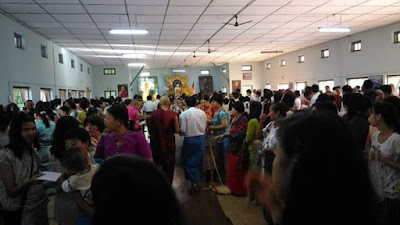 (Buddhists gathered at the Sunlun Monastery) 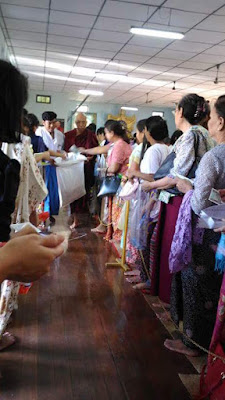 (People were ready to offer alms-giving while monks were coming.)

After the ceremony, people can pour water on the sacred tree – Bodhi Tree in the Sunlun campus. There were Nethar (Burmese Thanakhar – natural make-up) were already prepared mixing with water, and for throwing together into the Sacred Tree. 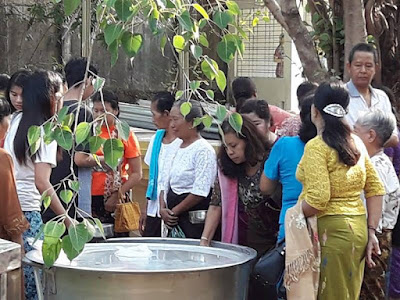 (Buddhists were pouring water on the Bodhi Tree, waters were ready at the big bowl.) 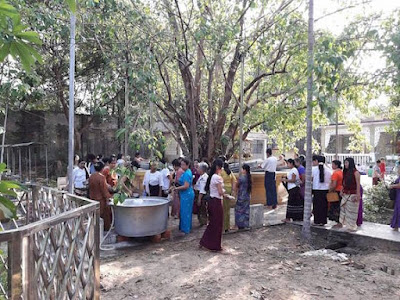 (Bodhi Tree, and Buddhists participated in the act of honoring Buddha.)

For having Nethar (Burmese natural make-up), Sayadaw prepared 4 Big circular stone slabs at Sunlun monastery. They were ready for you for rubbing the Nathar bark with a few drop of water on the stone face, and by your circular motions, creamy natural make-up appeared. It was a very hard work. Really! I only could have done a spoonful of Nethar creamy for 10 minutes of rubbing the bark! For those taking-part ceremony, the Nethar creamy would be added into the water for pouring into the Sacred Tree. It was the act of honoring Buddha’s Sacred Day.

(See the Big circular stone slabs, with Nethar barks. Men also participated in it although it was a women’s duty.)