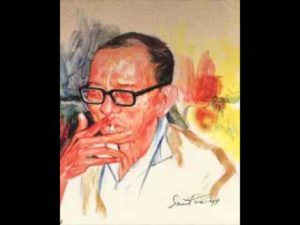 The Answer by Thu Maung

My father was a writer,quite famous too.Most of his writings are fiction.A few of them are articles. But they have one common object , namely family life.I read his work.I grew up with his ideas.He was my first teacher as a parent as well as a writer.

My mother used to say,”There are two writers that I admire most, ….. your father and Thaw Dar Swe, because their writings read so naturally, easily and simply.

Marriage.About eighty percent of his writings is about marriage, the art of being happily married….. that’s his theme.

One writer , Aung Pyay used to say ,”When I was still a bachelor reading your father’s work made me want to get married.”

My father not only wrote about marriage but also took the role of an unpaid marriage counsellor whenever there were conflicts between married couples.I don’t know how he did it , but all his negotiations ended well.

However, one thing thing puzzled me…..my father,a great marriage counselor, but still unpaid, a great writer on the art of being happily married had two unsuccessful marriages.Why?

I have always wanted to ask him why he, in spite of himself ,could not make a success of his own marriages,including the present one. It was no secret that the marriage with my mother was not going too well.There was even talk of another marriage.

On that prticular day,the urge to ask that question,why? became too strong to hold any
longer.So I went to my father’s room to ask that particular question.He was not there.I searched the whole house.He wasn’t at home. Then I was told that he had gone to the barber’s shop to have his hair cut. So I waited his return.

I didn’t have to wait long.He came back.But his hair was the same.It didn’t have any sign of being cut.

So I said to him,”They say you went to have your hair cut.”

He laughed revealing his broken teeth and said ”Ha…ha…ha… that’s the funniest part of all. The barber wasn’t there.Why? Because he has gone to have his hair cut ..,ha….ha…ha….”

So that’s the answer to the question that’s been bothering me.The barber who cuts other
people’s hair cannot cut his own.