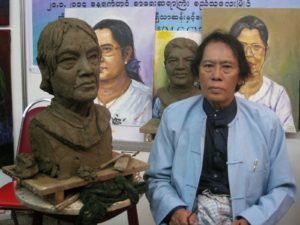 I have been working for this theatrical company for ten years. Our work involves travelling from place to place.Something like a circus. When we arrive at a place,we look for a suitable plot of land to build a bamboo theatre. It’s temporary, of course.Then we put up performances , like singing, dancing, plays, opera, concert, the whole night through.This goes on for about five to ten days.When it’s time to move again, we take down the theatre , carry it piece by piece,and move on. That’s our life in short.

I am the manager. My work involves managing,that is,everything short of directing, producing and entertaining.But now , I am doing something more than managing.I have a reason. To be more precise, I want to do a good deed. What kind of good deed? Well, to begin at the beginning, it’s like this ……

I met them at the booking office.I was selling tickets, which is part of a manager’s job in this line of work.They were five youths with expensive clothes and motor cycles. One of them was called Khin Maung Kyi.They bought first class tickets. They came again the next day.This time, they took mats. They came again…. We became friends.I invited them to see the inside of the theatre.They were delighted. If only I knew….. The entertainment went on for another five days.They came every night.They also came to visit me inside the theatre.

I said to them,”Well,go and see for yourselves what goes on behind the scenes.”

One evening, before we took another journey, I took a walk in town. I saw two motor cycles in front of a coffee shop.I recognized them. So I went inside.There, I found Khin Maung Kyi and one of his friends Banyar Aung and Mi Thu Zar.

Mi Thu Zar…….. I knew her when she was working with a small troupe of traveling entertainers. She had talent. So I brought her here.The owner also liked her and made her the top dancer. She danced well. In fact, she was an excellent dancer. I’m afraid that’s all I can say to her credit. Apart from that,….. she was…..how shall put it?….too subtle. Anyone who looks into her eyes could not fail to be caught by her charm, and she knew it and took advantage of it.

Now,….. The next day, Khin Maung Kyi’s friends came and confided in me. They said ,”We have a problem, U Lay. First,we thought it was just a passing passion. But now,Khin Maung Kyi wants to marry Mi Thu Zar.His parents are very unhappy about it.What shall we do?”

According to what they said,Mi Thu Zar agreed to marry Khin Maung Kyi under two conditions, that he come and travel with the troupe , and that she be free to continue her dancing career. They thought that the conditions would deter him from going ahead with the marriage. But that was not to be. However, KhinMaung Kyi agreed to wait till the next Thadingyut festival.

That gave me an idea. There was still time to carry out my plan. I said .”We’ll be here for the next Pagoda festival. There’s going to be new play. It’s special. I hope you all come and see it. See you then.”

The play was really special. It is based on one of the Jataka stories, the story of Oggasena,a rich man’s son who married a dancer. After the usual songs and dances, the play began with a soliloquy song by Oggasena .

lt went as follows. ”The air is her element. As she dances In the skiey spaces, On the tip of the pole, She does not leap, But dwells like a high cloud, On a summer morning. How she manages her supple body With grace and skill Just as she manages This heart of mine to throb With the ache of longing.”

The girl in question was Maya,the top dancer of a traveling troupe of performers. Ossasena, a rich man’s son fell in love with her. Maya agreed to marry him under two conditions,that he come and stay with her and travel along with the troupe, and she be free to continue her career as a dancer. So Oggasena and Maya got married.

As agreed,he travelled along with the troupe and Maya continued her dancing career. Then came the usual songs and dances typical of a Myanmar ‘zat pwe’,a mixture of play, opera and concert. Before Oggasena married the girl, he had always been treated with respect as a rich man’s son. Because of his status,he and his friends used to occupy the best places in the audience. But now, he could see sons of rich men occupying the best places in the audience and enjoying the entertainments while he was running errands and looking after the baby.

One of the highlights of the play was the quarrel scene between Oggasena and his wife. Maya , talking to the crying baby, ”Hush, baby , hush,son of a know nothing, a water carrier, runner of errands, ……”

Oggasena . ”Wife, take care whom you call know nothing, and all that .”

Maya , ”I call whom what I like.What business is it of yours ?”

Oggasena ,”I am your husband,and I am educated, rich,in fact I have enough riches to buy this whole troupe.”

Maya , ”You still don’t realise,do you,that we care an elephant’s dropping for your riches and education. Don’t you realize that in our line of work,a man’s esteem is judged by what he can perform,his contribution to the show, and not by how educated or rich he is.So ,a clown is held in higher esteem than you.”

That was when Oggasena decided to become a performer.But,he decided that he would no ordinary performer. Everyone would address him as Oggasena the Great. Just wait and see.

The great day came.Everyone was waiting. Oggasena stood on top of the pole.First, he made some acts like a clown as if having difficulties in balancing himself.The audience watched in silence.Then he prepared his greatest feat.

At that very moment,the Lord Buddha came. Everyone who was watching the show left the performance to pay respects to the Buddha.

Oggasena was dejected. O,Gautama Buddha, the Omniscient One, Crown of the three worlds, why did He have to come and spoil what would have been the greatest performance of his life?

The Lord Buddha,whose wisdom is infinite, unbounded and without limit, knew what was passing in the mind of Oggasena and addressed to him thus ,

Hearing these words,Oggasena replied , ”O , Lord Buddha of the nine supreme attributes, and ten perfections, I perform for You , and for the crowd. Watch and see how I jump and turn fourteen somersaults in the air and landing my foot on top of the pole,balance myself once more .”

Oggasena stood on top of the pole.Then he jumped and turned fourteen somersaults in the air, landing his foot on top of the pole again, balanced himself once more. Even as Oggasena was performing, Lord Buddha addressed to him as follows ,

”The past is gone, The future has not come , The present is here and now. If your heart be free From every attachment, You will undergo No rebirth , old age or death. A far greater glory awaits you, My son. Touch and awareness Be mindful of these two, For that is the way to end all suffering, That is the way to Enlightenment. For he who is mindful Of the awareness of touch, Sensation and knowing, Shall be free, Never to be reborn, Never to suffer, Never to die. ”

Hearing these words,Oggasena became mindful of the awareness of the touch of his foot on the top of the pole, and the touch,the sensation , the mindfulness and the knowing all integrated into one. Everything he had fulfilled in the past lives came to him, so that he became free from desire, anger, ignorance, and attained Enlightenment.

Maya who had been his life partner in the past lives too became the Buddha’s disciple and attained Enlightenment.

The audience enjoyed the play. All members of the troupe were delighted.The greatest reward was still to come. Khin Maung Kyi gave up his plan to marry Mi Thu Zar,to the delight of his parents and friends.

Well … let me explain …… My life was ruined the day I married my wife, who was a dancer of the troupe.I made my parents very unhappy. I traveled with the troupe and everyone looked down upon me. One day I made a decision.I worked very hard.The owner of the company appreciated my work and gave me the authority of a manager.

In case of Khin Maung Kyi, things would be very different. His calibre is a far cry from Oggasena’s. He could not endure the things I endured.So, I really felt that I had saved Khin Maung Kyi’s life.That is why I said it’s a good deed done in the right spirit.