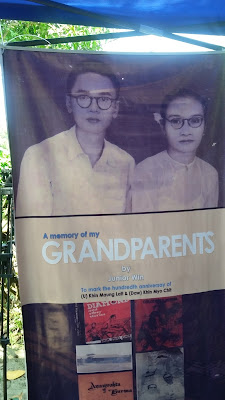 (The cover of ‘A Memory of My Grandparents’; My grandparents; U Khin Maung Latt, and Khin Myo Chit (writer))

My grandparents had made friendship with several friends including writers, poets, cartoonists, journalists, politicians, etc. They sometimes recalled their memories what they met friends, or how they struggled during Japanese regime. I hear from them the name they always remembered. Among them, Hanthawaddy U Win Tin (1930 – 2014) was their life long companion. However I says U Win Tin as ‘their old friend’, he was ten years younger than my grandparents. I used to call him ‘uncle’ or sometimes ‘grandpa’ as he himself mentioned to us. 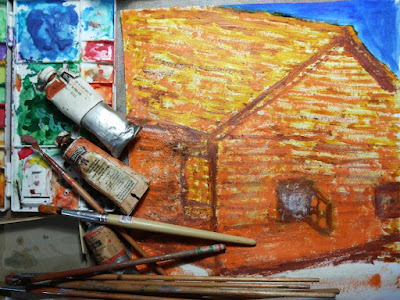 (My drawing of ‘Aye-Yeik-Thar’. I used my grandma’s old paints.)

He admired our grandparents very much. When my grandparents stayed at Aye-Yeik-Thar (peaceful villa) in 1950, my grandma was severely ill. U Win Tin took a leave from his work for a month, and came and took care my grandmother. At that time, he was working at Rangoon Sar-Pay-Baik-Man Office. Although his working place and Aye-Yeik-Thar were at the same country, he preferred taking care my grandma for 24/7.

I was curious to know how he took care grandma!

He sat beside my grandma’s bed, and recited Shakespeare’s plays, and paragraphs to her. Yes! I knew grandma was such a type! She never let her precious time passed wasted! However she was forced to stay in bed for a few weeks, she was strong enough to call anyone nearby, and insisted them to recite famous plays or poems. No one dared to stay near my grandma except U Win Tin. 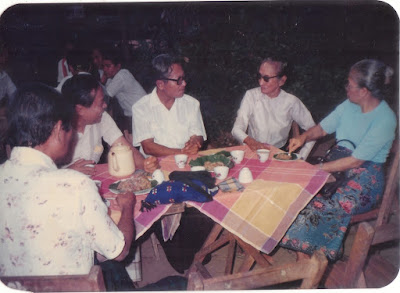 (The centre in photo; U Win Tin, and grandma in 1988? at Htamene Party (Harvest festival) in our garden.)

U Win Tin was born on 12th March of 1930, and he was imprisoned and tortured for 19 years (1989 – 2008). He was a well-known journalist, and writer of all time. I remembered when 1988 demonstration occurred in Burma, and military attacked University students, it made the whole nation aroused their anger. U Win Tin, and some journalists, and writers came to my grandparents with the paper showed the protest against the military government. They were collecting people’s signatures especially of well-known writers, journalists, poets, etc. I still remembered grandma signed with tears, and grandma let the whole family altogether signed on it. It was the last time I saw him in person until he released. 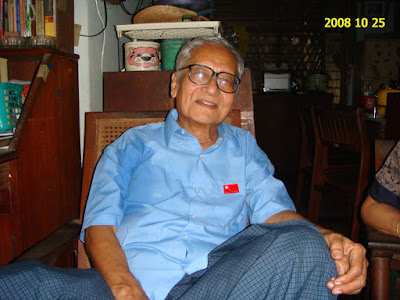 (He came and met us after he was released. He always wore the blue shirt (prison symbol) showing he still was in prison however he was free to go.)

My grandpa died in 1996, and grandma in 1999 while U Win Tin was in prison. He must be sad hearing the news of our grandparents. When we heard he was released in 2008, he came to our house. He talked a lot about our grandparents, and recalled the old memories. After he released from prison, my twin brother was interviewing him about his experiences of his life-time. They became closed friends, and my brother always called him and talked about the political matters.

I was not a good interviewer. But I had only memory of what he told me why he chose the life of journalist. In wartime, there were youths who were eager to fight the intruders. U Win Tin was only 10. He met Bogyoke Aung San, told him he wanted to join the army. Bogyoke said not now, he should have to continue his study would lead to the future of our country. Education would be needed, and more essential when we won the Independence. That’s why he chose his life as an educated one. 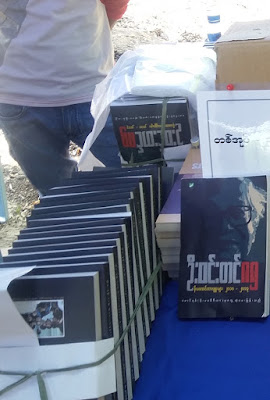 In 2013, we visited his house, and requested him to write memories of our grandparents. He promised. On March 2014, he did write an article about our grandparents. We did not know it might be his last one. He died on the 21st April of 2014. Later my brother published a book the collection of interviews with U Win Tin in 2015. When we held the 100th Anniversary of our grandparents in 9th May 2015, the book appeared on that day. 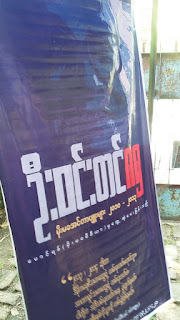 (The book cover of his interviews collection.)