Pho Tay was telling his friend Nyi Nyi about his experience that morning .

”You remember our friend Soe Myint telling us about a rabbit with a tail only one inch long? He said the rabbit lives in that grove yonder.Well.I was waking across that grove when I saw a rabbit peeping at me from behind a mango tree.I could see his two bright eyes, but since the rest of his body was behind the tree , I could not see his tail. I wanted to know if it was the same rabbit that Soe Myint was talking about.So , I circled around the tree from a distance to see his tail. I circled round the tree four time.But the little cheat also kept moving round always keeping his tail behind the tree,eyeing me suspiciously from behind.I just couldn’t see his tail.”

”So you circled round the tree four times, right ?” asked Nyi Nyi.

”Yes,” answered Pho Tay,”Round the tree,but not round the rabbit.”

”But the rabbit was under the tree.”

”No,not necessarily since the rabbit kept facing and I couldn’t even see his back.” 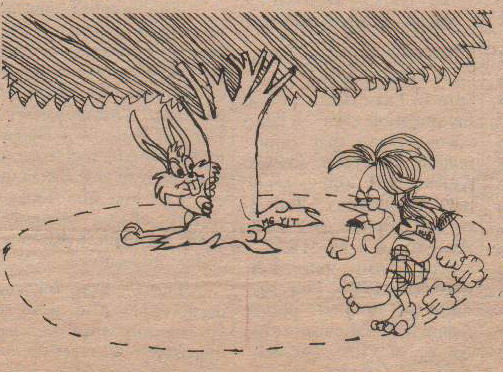 (Rabbit under the tree.)

Finally they went to their Maths teacher.

After listening to them,the teacher said,”Your whole argument rests on the definition of one word,namely ‘circling’. Now,how do you define the phrase ‘to circle round an object’ ?In this case there are two ways to define it.

”No , no that’s not the way to ask.In mathematics, you can accept any definition you like.You may ask which of the two definitions is generally accepted ,since all definitions are acceptable.”

Pho Tay and Nyi Nyi were silent.The teacher continued.”I think that the first definition is the one which is more generally accepted. Here’s why. The earth makes a complete revolution round the sun in one year.This has been calculated without taking into account the revolution of the sun on its own axis.””Oh,really,does the sun revolve by itself?”

”Yes it does.For your information,it does a complete revolution on its own axis in 26 days.”

”So that solves the question of ‘circling’.But there is still another problem.”

”No.I cannot suggest anything.Better ask my brother Sein Khin Maung Yi ,the film critic. However, I can suggest that you can try agreeing on the definition of ‘better’ .”