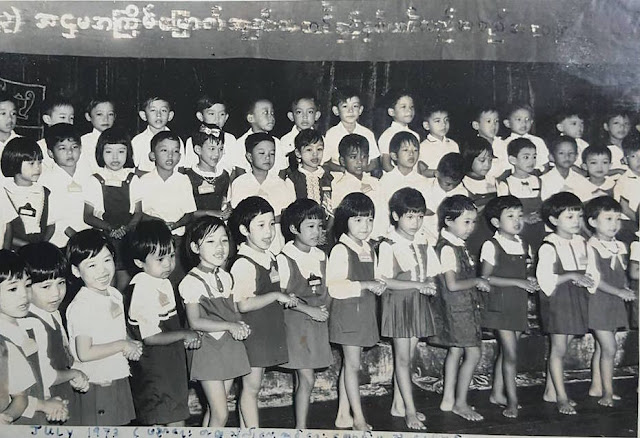 We attended at the Teacher Training School (TTC) in Kamayut Township. It was situated near our house.We twins studied at the same room. I did not remember very much about my primary school life. One thing I remembered was I missed my home, and my parents when I was at school. My brother was happy-go person. He did not cry, and missed no one. I was told that my parents were sorry to left their daughter alone (even with her twin brother), because she was crying a lot when they planned to leave. Then they lied to her that they were behind the school wall, and waited until the times up. She was only a child, so she really believed that her parents were near her, and were waiting outside. She did not know her parents returned home. It was a pity that I really believed their words at that time. When I grew older, they talked about it, and I became realized that they lied to me.

My School Life in the Country 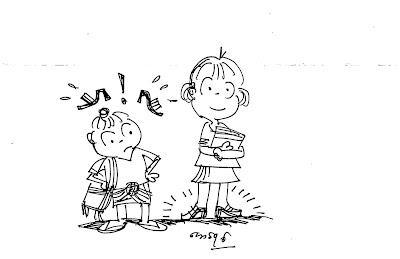 (I was proud to wear high-heals among the country students.)

When our father was transferred to Basin (Delta, Southern Burma) from his work, the family (4 of us) moved to Basin with him. He worked as Assistant Lecturer at the Basin University at the Mathematics Department. We stayed there for 2 years until the cyclone hit Basin in 1975.

My twin brother, and I continued our studies (our first-grade) at Basin.  We sometimes went to swim at ‘Three Stairs Lake’ near us. I could not swim even my father, and my twin brother patiently taught me. I could only play in the water. I was so happy there. I never missed TTC in Rangoon. There were many things for both of us to play around. The lake near our house, and the school not far from home, and the never-ending field around us; all make us paradise. We heard the ghost stories from the villagers about ‘Three Stairs Lake’. Believe it or not, we were afraid to walk near that lake at night. 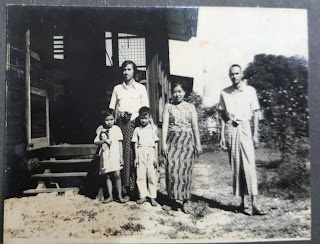 (Our house at Basin. The place we lived was called ‘6 Houses Lining’.

There were 3 houses face to face with other 3. We lived at the middle of 3 on left hand side of the short road. ) 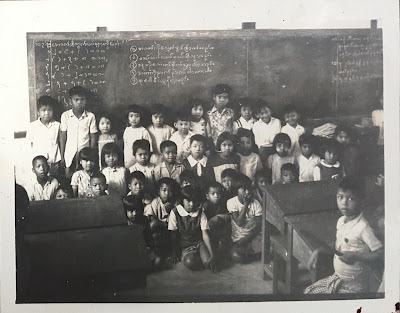 (Our school life in Basin was fun. Find us!)

We went to school by foot, and our uncle took care us. He was my mother’s youngest brother, and he stayed with us, and attended at Basin University. I met friends at Basin Primary School. My mother worked as temporary teacher at the school. We had so much time to play around. My grandparents visited to us once per week, and we also visited Rangoon in our holidays. Grandma brought her non-Burmese friends, and we all together visited pagodas around. Although we missed our grandparents, and Rangoon home, we were happy to stay there. If nothing happened, we would have lived there for the rest of our life. 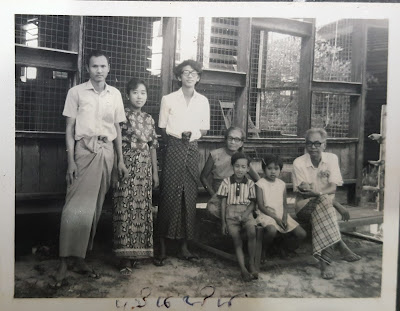 (Our grandparents frequently came to us. They missed us so much.) 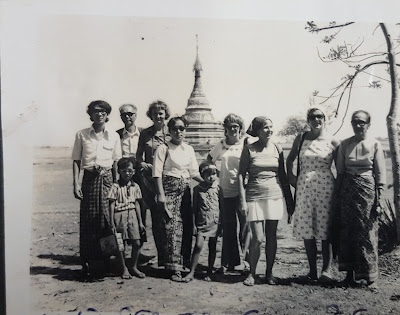 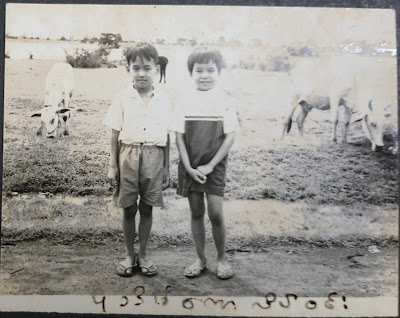 (We were county boy and country girl at the Basin countryside.)

In the July of 1975, the monstrous cyclone hit Basin. At that time my mother’s family including her parents arrived to Basin. There were 11 family members of us at Basin home. Before the cyclone began that evening, my mother went to shopping with her sisters. When they came back at their return home, they saw trees were shaking too much. The wind started to blow. But they did not afraid. Even the taxi driver was laughing. He said that it was natural winding at Basin. They arrived home in the evening save and sound. The wind blew harder since then.  My mother worried about the taxi driver if he arrived his home safe!

The cyclone started at the late evening, and stopped the next day afternoon. When the windows of my parents’ room started to break, and the cracked pieces of glasses spreading on the bed, we began frightened. There was only one room left was safe. All gathered kept at home for the whole night. All the other rooms were filled with pieces of glasses, and the floors were full of water. The wind was entering into the house from the broken windows, and doors. The whirling sounds were heard around. Those sounds were from the pillars which might be lifted by the force of wind. They were flying above, and then hit to the roof of the houses. One of the pillars was breaking the roof of our kitchen, and inserting upright into the floor. There was half of its length was inserted. How strong the wind must be! Under those hazardous conditions, the children were hungry. My mother, and her sisters went to the kitchen by the help of our uncles, and cooked under the rush hour. My maternal grandparents were praying for our safety. We were lucky that all the cooking materials were bought on that day. Other families around us missed their dinner, and also their meal for next day. 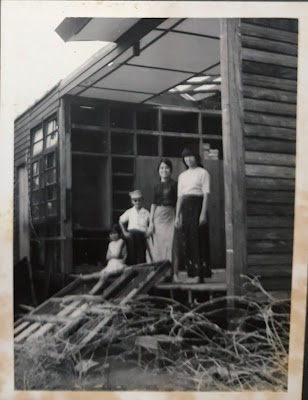 (With our aunties. We looked around, and took photos of ruined houses.)

In the tomorrow afternoon, the wind became calm. We started to peep around. Our house was fully wet, and 3/4 of the roofs were gone. There was no window left except our room. Excited to see that one of the corners where the household shrine was kept was safe. The field around us was seen like the sea. We seemed were in the island circling with water. The kitchen of our neighbor house was disappeared. It seemed that it was lifted by the wind. The whole town was ruined. We saw every field filled with water, and trees were broken, and some houses were destroyed. All the water became polluted. We know that my grandparents at Rangoon were worried so much for us. They could not contact us at that time. All the phone lines were gone, and the electricity, and all the connection was lost.

Shortly after the storm, we survived under this for a little period of time. The consequences of pollution would come in a short time. Maternal grandpa decided that all of us to return Rangoon as soon as possible especially for the children’s sake. Later we had received a contact with our grandparents at Rangoon. They made a decision that my father had to quit his work, and back to Rangoon. My father obeyed his parents’s decision. 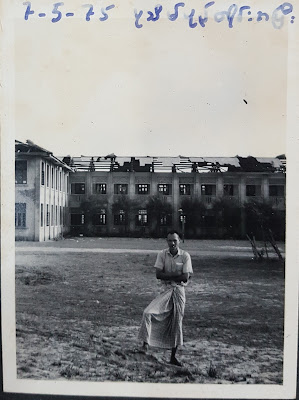 (My father stood before the Basin University after the cyclone.) 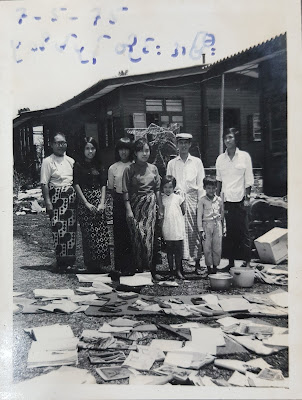 (In the front of our house. The family with wet books which were scattered on the ground to be dried at hot sun.)

Before we were leaving, we bid farewell to our Basin school friends. We could not reach to all. But friends we met last time were not happy for our leaving. Their families also became part of our family too. They were kind, sincere, and honest. But we had to leave them all. The natives we met around said that the cyclone we had met now was they had never seen in their life before. We took photos around near our place including the Basin University which roofs were absolutely gone. 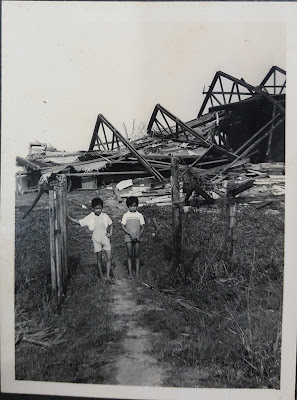 It was the time the University opened. Some students arrived, and stayed at hostel. Luckily, the girls did not arrive at their hostel yet, and their hostel was absolutely flat. The University students whose towns and countries were away from the cyclone, and they did not know about the cyclone news. They arrived to Basin University, and found that all the rooms were ruined, and they even had no food to eat. At that time, hundreds of candles arrived from the government. It was for the University students. But all the arriving students packed their things, and returned to their home. The Basin University was closed for the reason that there was no student come.

At that time my grandma in Rangoon sent raincoats which were given from her non-Burmese friends. My parents brought those raincoats to the cyclone victims as far as they could reach. The victims were surprised to accept the presents, and said ‘It’s all are to return to you after taking photos?’ My parents laughed, and said, ‘No, they all are for you. We are not taking back.’ 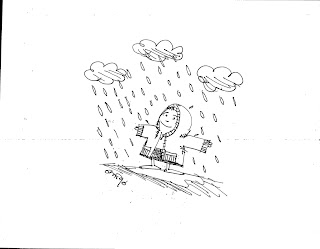 (They were happy for raincoats. No need to give it back!)

Yes! Those things above were beyond the knowledge for the 7 years old kid! But when I grew old enough to understand the adults’ words, I recalled the old memories as it happened yesterday. Shortly to say that, we all returned to Rangoon, and we continued our study at the new school at half term.

← HOW DECEMBER BECAME THE TWELFTH MONTH OF THE SEASON By Dr. Khin Maung Win (Math)
My Life Will Go On (5) by Junior Win →