My father was working as an Associated Professor at the Mathematics Department, while I was attending the Master classes during 1991 – 1993. I still needed my father’s teaching. At first my friends did not know my father was a mathematician as well as a teacher at the Mathematics Department, Rangoon University. When he taught Analysis at the Final Year Mathematics Master classes, he became not only my teacher but also my friends’. 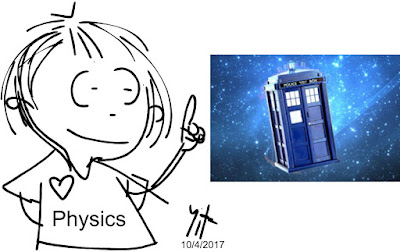 (‘I wondered if I had chosen Physics Major three years ago, what would have happened. Now its too late. But if I meet Doctor Who, he will help me’) (Drawn by Maung Yit.)

Being the daughter of an Associate Professor in Mathematics was not easy, especially, if you are taking mathematics major. After getting through the First year, Second year and Third year (Final Year) honors classes, I passed without getting a single distinction. My new friends I met at the University asked me whether my father taught me anything at all. Even my friends passed with distinction in Honors Three Years, and they were always in higher positions. But they never understood the side of a daughter of a mathematician. They believed as ‘How lucky you are, your father is a mathematician and he is still in service.’

(My father did not change his opinion when he taught Mathematics at his classes,

Nobody knew how I worked hard during my Honors Student life. I realized that my marks on the honors exams were always on the barely pass. I even got zero in the tutorials although I sat regularly the tutorial exams. I know that for all the students who regularly sat the tutorial got at least ten marks which can carry to the final exam. Whenever we came to know my final exam marks from my father, my mother was surprised and said, ‘Are you sure, Junior. Are you sure you always sat the tutorial regularly? You really wrote down your correct roll number and signed your name on every tutorial paper?’

Who know? If I said aloud between my friends, they would remark I was mistaken or misunderstood between the tutorial teachers and me. They would ask me as my mother said. Ok, let’s wait for my thesis defence. My waiting will pay off on the day of my thesis defence. They will see although I never got any distinction through my honor exams, I will get good impression from the examiners before the audience including all of you. 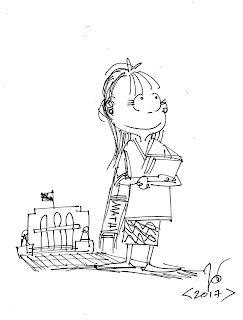 (My mind was focused on the day of my thesis defence.) (Illustrated by Maung Yit)

I believed when I sat the Thesis Defence to public, I would show them how I could answer all the questions all the examiners asked. They would realize that I was best in mathematics not only because of her father alone, but also her own hard work. Say whatever you want or criticize my work as far as you could, you would see me on the day of my Thesis Defence. On that day my father’s training will pay off. I will show them who’s the greatest. Wait and see.