I was preparing for my thesis defend.

I asked my father how a thesis was evaluated by the examiners. He replied that there were three factors with determine the outcome of a thesis defence. They are writing style, presentation and the answering of questions, of which the answering of questions is the key. That is why a thesis defence is also called a viva examination. I wondered the writing style and presentation are not as important as answering the questions. He said even if the thesis is well written and the presentation quite good if the candidate cannot answer the questions, one is under the impression that the writing is not his and that the presentation he gives is just repetition of lines he had learned. Oh! I don’t believe that: but, I can understand their impression. 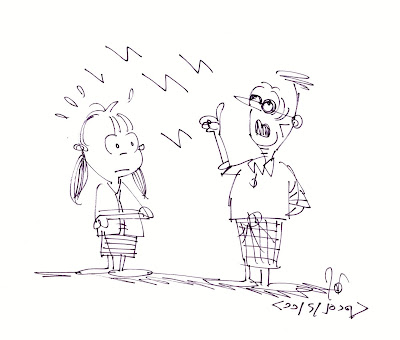 (My father gave me a long speech before my thesis defence. ‘Make the presentation simple, clear and impressive.’) (Drawn by Maung Yit)

My father reflected his experiences; he once met a candidate who gave a very impressive presentation, but when he was interrupted to clarify a point, he was lost, and began his presentation all over again! I wondered how the examiners evaluate the candidate’s ability. It was quite easy, said my father. By questioning the student! The questions might be very thorough, they may give some problem for solution. They could judge the candidate’s ability by the way he answers the questions. I asked my father again that what happened if the candidate could not answer any of the questions. Well, the examiners may give him the Master degree at an ordinary level, that is, without credit or distinction. On the other hand, the examiners may decide that the candidate is not yet ready for the Master degree, and give him another chance to sit for another viva examination at a later date.

He always gave examples how in the other countries do. In France (My father obtained his Ph.D in Mathematics in France, 1970, so knew very well about it.), Ph.D thesis defence is a public occasion. They put on a notice inviting everyone interested to come and listen, and ask questions, even take part in the discussions. That’s what we call creating an academic atmosphere. But I regretted that it was not the same here. I wanted to invite all my friends to come. He said it was not like this in the past. That’s why he had been trying to make a thesis defence a public occasion, but without success, until now. But he smiled and encouraged me that the new professor had agreed to put on a notice inviting everyone interested to come. My thesis defence would be the first public occasion of that kind. That’s great!

I listened to what my father used to say, make my presentation simple, clear and impressive. Talking about technical points without stopping gives one the impression that I was simply repeating what I would have learned by heart. Make it short so that anyone can ask questions.

I wanted to know how the thesis evaluated. He replied that there were three levels such as ordinary level, credit and distinction. Everyone gets the degree in the end. Good candidates pass with credit. Only exceptional candidates get distinction. Oh! What I was going to do to get distinction. My father said that the question time is the key. That’s where the candidate’s true caliber is tested. But sometimes I heard from my seniors that the examiners asked questions which had nothing to do with the thesis. But father said that it was within their right to do it. However, it will always be within the bounds of mathematics. They cannot ask me about Shakespeare’s plays. But remember also, there’s the audience to consider.

Yes, of course. Whatever takes place during the viva examination, the audience will know. My father suggested that there are always ways to provide questions that I want to be asked. That is by leaving a few loose ends in my presentation. In that way I may arouse the curiosity of the examiners. But my father reflected again when he defended his thesis in France, what he did was different. He said he was too worried about his presentation to do that. It’s something he learned afterwards, and so he had any occasion to do it himself. But that is what he usually advise the best of his candidates to do when they defend their thesis. Imm… That is what he, as he supervisor as well as my father, advise me to do. 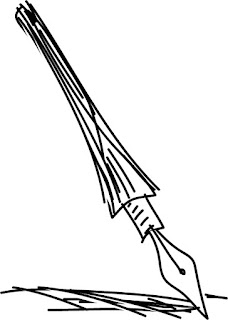 (The night before the thesis defence, I wrote down the article, a sequel of ‘My life will go on’. I reflected through my academic life, and my hope for the best. I could not predict what would happen on my thesis defence. Then I put my pen rest for tonight. I promised I would make conclusion of my article about my thesis defence on tomorrow night however I would fail or otherwise.) (Drawn by Maung Yit)

Yes, I will do it. I have more reason to do it, because the teachers at the University have never shown any appreciation for my work or my ability. My friends are the same. They all think that writing everything they have learned by heart in the written examination is the true ability in mathematics. Now is the chance to show them. They are going to see how a true mathematician answers the questions! Even if I cannot answer any of the questions, I will be satisfied, because it will be the chance to see my true self. It may be good way of subduing my pride.